Nirmala Sitharaman is the first defence minister to visit the sensitive airbase in 16 years, after George Fernandes in 2001. 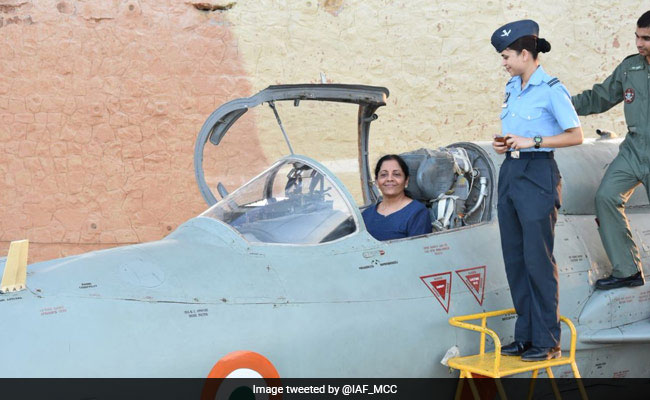 Nirmala Sitharaman is the first defence minister to visit the frontline Uttarlai airbase in 16 years.

Barmer: Defence Minister Nirmala Sitharaman today said that maintaining optimum state of readiness of the armed forces on all fronts would be given top priority, comments which came amid concerns over security challenges on the country's northern and western borders.

After interacting with senior officers of the Indian Air Force at the frontline Uttarlai airbase in Barmer in Rajasthan, Ms Sitharaman also said the government's priority was to strengthen all three armed forces.

Ms Sitharaman is the first defence minister to visit the sensitive airbase in 16 years, after George Fernandes in 2001.

Air Chief Marshal B S Dhanoa was also present at the base.

The defence minister was apprised of the role of the airbase and the nature of its operations, the IAF said.

Ms Sitharaman said that meeting the demands of the armed forces with a view to maintaining optimum state of readiness and preparedness on all fronts would be accorded priority.

There would not be any lack in efforts on the part of the government to strengthen the defence forces, she said.

The 58-year-old defence minister said, "I am obeying Prime Minister Narendra Modi's directions to meet the jawans posted on the frontiers."

Promoted
Listen to the latest songs, only on JioSaavn.com
"I was in Goa earlier in the morning to flag off Indian Navy women crew's attempt to circumnavigate the globe and now have come to Uttarlai Air Force base in Barmer," she said.

The newly-appointed defence minister said that Uttarlai airbase was important from the strategic point of view.