Winter Solstice Google Doodle: Solstice occurs because the Earth is tilted on its axis of rotation by about 23.5 degrees and the tilt causes each hemisphere to receive different amounts of sunlight throughout the year. 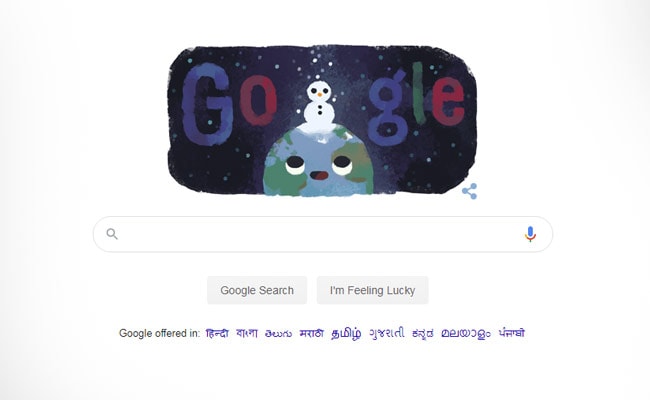 It's the coldest time of the year as temperatures have started dipping in and winters are here.

Google Doodle today observes winter solstice -- the shortest day and the longest night of the year -- a phenomena that occurs when one of the Earth's poles has its maximum tilt away from the Sun.

The word "solstice" originated from the Latin solstitium meaning "sun stands still", when the 'movement of sun's path' stops briefly.

Solstice occurs because the Earth is tilted on its axis of rotation by about 23.5 degrees and the tilt causes each hemisphere to receive different amounts of sunlight throughout the year.

The December solstice is the phenomena when sun's direct rays reach the southernmost point south of the equator, along the Tropic of Capricorn.

The solstice occurs in the Northern Hemisphere when the sun is directly over the Tropic of Capricorn, located at 23.5 degree south of the equator. This tilt in Earth's axis brings more exposure of different parts of the planet to the Sun at different times of the year.

In December, as the Earth's North Pole turns away from the Sun, the Southern Hemisphere gets the maximum sunlight. The exact times of sunrise and sunset depend on two things -- the latitude and geographic location within the different time zone.

Many people gather at Stonehenge to capture the moment when the sun directly aligns with the famous stones.