Meena Kumari Google Doodle: She was just six when she made her debut in "the Leather Face", produced and directed by Vijay Bhatt. 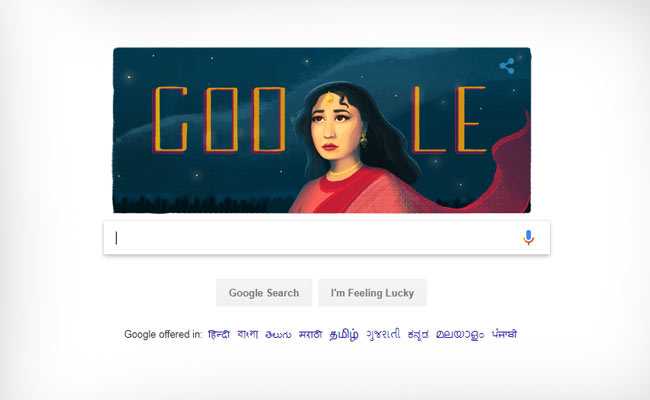 Today's Google Doodle celebrates the 85th birth anniversary of Meena Kumari, the yesteryear actress remembered as the "tragedy queen". Meena Kumari was born on August 1, 1933, to Ali Baksh and Iqbal Begum, as Mahjabeen Bano. Born in a family of theatre artistes, she faced a poverty-stricken childhood. She was just six years old when she made her debut in  "Leatherface", produced and directed by Vijay Bhatt.

The iconic actress has inspired generations with her memorable performances in movies like "Sahib Bibi Aur Ghulam", "Pakeezah", "Baiju Bawra", "Yahudi", "Bahu Begam', among others. In her career spanning 30 years, she acted in over 90 movies. She symbolised love and loneliness on screen. "Azaad", "Miss Mary", "Shararat" and "Kohinoor" were the few movies where she was seen in comic roles.

Meena Kumari was not just a talented actress but a poet too. She wrote under the pseudonym "Naaz". "Tanha Chand", a collection of her poems was published after her death in 1972. The book was compiled by famous writer Gulzar.

In the album "I write, I recite", one can listen to Meena Kumari recite her poems.

She became the first recipient of the Filmfare award in the "Best Actress category" for her movie "Baiju Bawra" in 1954. Interestingly, Meena Kumari is the only Indian actress to have won three Filmfare nominations for the "Best Actress" category in the same year. This was in the year 1963 when she was nominated for her performances in "Sahib Biwi Aur Ghulam", "Main Chup Rahoongi" and "Aarti".

Meena Kumari was just 38 when she died of liver failure, weeks after the release of the movie "Pakeezah". In today's Google Doodle, she is remembered as a courtesan, the role she played in "Pakeezah". The Google Doodle shows her in a red saree with her signature expression.