Goa Assembly elections witnessed a record turnout of 83 per cent.

New Delhi: The poll of exit polls indicates that the BJP is likely to retain Goa again. The party is way ahead of the Congress, with 18 of the state's 40 seats. Three of the four surveys -- which were averaged by the poll of exit polls -- did not rule out a majority for the party. The ABP News-Lokniti predicted that the BJP will win 16 to 22 seats, India Today-Axis polls said 18 to 22 and India TV-C Voter gave a figure of 18 to 21. To cross the halfway mark, the BJP needs 21 seats - exactly the number it won in 2012. India News MRC said the party could win 15 seats and the Congress 10.

The poll of exit polls said the Congress -- which won 9 seats in the 2012 elections -- is likely to win 12 seats this time. Arvind Kejriwal's Aam Aadmi Party, which entered the fray in Goa with high hopes after its sweep in Delhi, is likely to win 3 seats.

In absence of an outright majority, the role of the Maharashtrawadi Gomantak Party or MGP can be crucial. The MGP, a BJP ally which won three seats last time, withdrew its support to the government in January after Chief Minister Laxmikant Parsekar sacked two of its ministers.

Promoted
Listen to the latest songs, only on JioSaavn.com
The state, which went to polls on February 4, had a record-breaking turnout of 83 per cent. The counting of votes will take place on March 11.

Health Warning: Exit polls can often get it wrong. 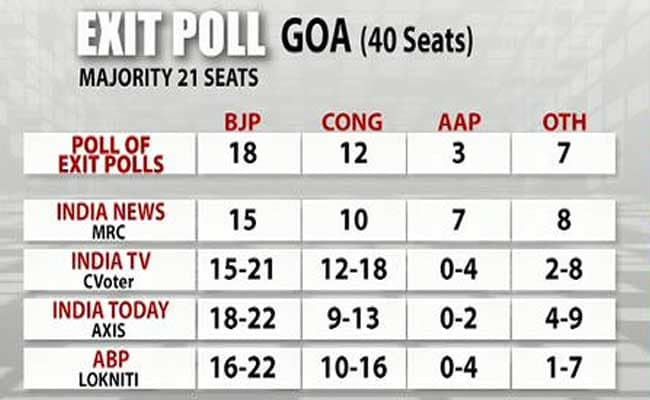