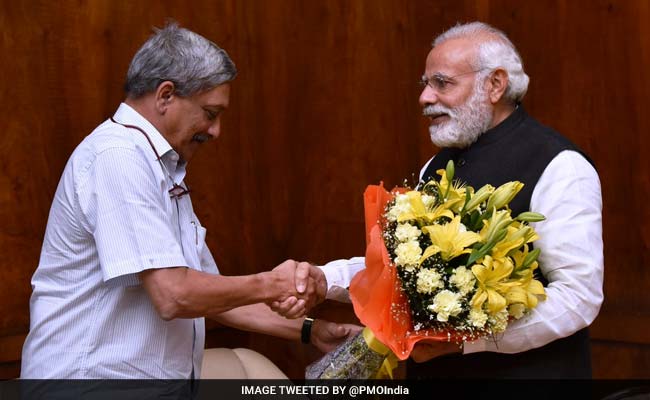 New Delhi: Goa Chief Minister Manohar Parrikar met Prime Minister Narendra Modi during his first visit to the national capital after taking charge of the coastal state for the third time. Officials said Mr Parrikar is in New Delhi to attend a meeting of the Goods and Services Tax (GST) council as he also holds the finance portfolio in Goa.

Mr Parrikar was handpicked by Prime Minister Narendra Modi to lead the Union Ministry of Defence in 2014. He was replaced by Laxmikant Parsekar as Goa Chief Minister.

However, speculation of Mr Parrikar's return to state politics intensified after BJP president Amit Shah and Union Minister Nitin Gadkari said that should the party retain power in Goa in 2017, the government there would work under the leadership of Mr Parrikar.

On polling day, Mr Parrikar joked that he missed the food in Goa and lost weight since moving to Delhi.

"I have lost 4 kg in Delhi because of the food. I like Goan food. You can interpret this the way you want," he had said.

Promoted
Listen to the latest songs, only on JioSaavn.com
Following the poll, the BJP managed to form the government in Goa despite emerging as the second largest party, behind Congress, after it was supported by regional parties. The parties extended support on the condition that the BJP should appoint Mr Parrikar as the Chief Minister. Subsequently, Mr Parrikar tendered his resignation as Union Defence Minister and returned to state politics. He will, however, have to seek election to the Goa legislative assembly within six months.