The resident doctors must believe in the system, Dr VK Paul of the NITI Aayog said, reiterating the safety of Covaxin.

We will prefer Covishield over Covaxin, the resident doctors are saying.

Resident doctors at one of Delhi's biggest healthcare hubs, the Ram Manohar Lohia Hospital, on Saturday demanded they be administered Covishield vaccine and not Covaxin since the former has completed all three stages of trials as required under protocol. The second one, produced by Hyderabad-based Bharat Biotech, is still only undergoing stage-III trials. The central government has, however, sought to underplay such apprehensions saying "a lot of work" had gone into the development of both products.

The resident doctors of Ram Manohar Lohia Hospital have even said they might not participate in huge numbers if Covaxin is used.

"Covaxin manufactured by Bharat Biotech is being preferred over Covishield manufactured by Serum Institute in our hospital...We would like to bring to your notice that the residents are a bit apprehensive about the lack of complete trial in the case of Covaxin and might not participate in huge numbers thus defeating the purpose of the vaccination," the Resident Doctors Association of the hospital said on Saturday in a letter to the medical superintendent of the facility.

"We request you to vaccinate us with Covishield which has completed all stages of the trial before its rollout," the letter said. 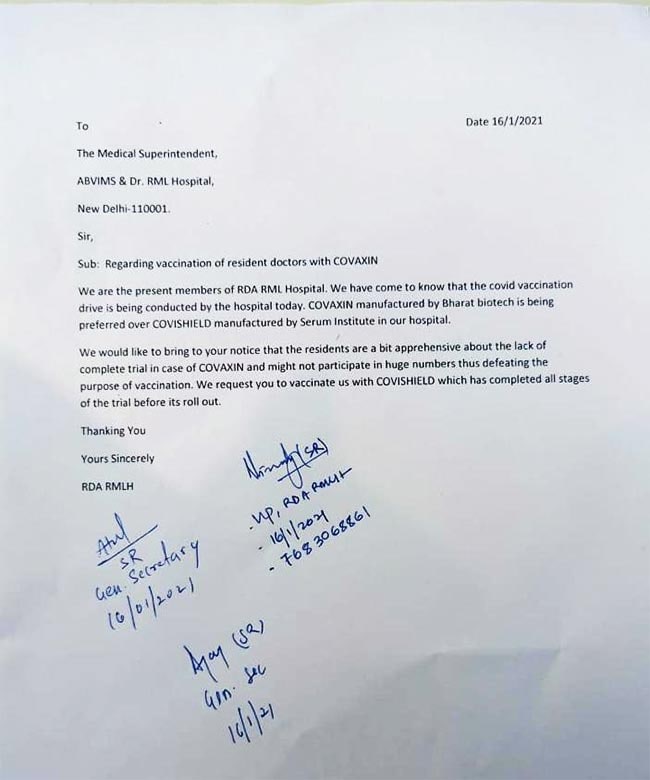 The letter written by the RML resident doctors.

Dr Nirmalaya Mohapatra, Vice-President of the hospital's Resident Doctors Association, said a lot of doctors have not given their names for the countrywide drive launched on Saturday.

"We are apprehensive regarding Covaxin. Trials are yet to be completed. We will prefer Covishield over Covaxin," Dr Mohapatra told NDTV.

Covishield has been developed by Oxford University and pharma major AstraZeneca and is produced in India by the Serum Institute of India, Pune. Covaxin has been produced by Bharat Biotech in collaboration with the Indian Council of Medical Research.

Referring to the doctor's demand, Union Health Minister Dr Harsh Vardhan said, "We can't generalise issues like that. People should not believe in rumours. A lot of work has gone into making these vaccines."

He said there is no question of choosing between the two vaccines.

"It's (choosing) not possible. In the next few months, we will be able to make more vaccines available as several are currently under trial," he said in Delhi after the inauguration of the national vaccination drive at the All India Institute of Medical Sciences by Prime Minister Narendra Modi.

NITI Ayog member Dr VK Paul, too, reiterated that rumours ought to be ignored. Covaxin was safe, he said, and declared that both him and Dr Randeep Guleria, the director of AIIMS, had received its doses.

"I feel proud about taking the jab...I request them (RML resident doctors) with folded hands to please come ahead and get vaccinated with whichever vaccine is being given," Dr Paul said.

"They are a part of the medical community and have served people for so long. They need to believe in the system," he said.