With regards to the adjournment of the Ram Janmabhoomi-Babri Masjid title suit case by the Supreme Court, the BJP leader sent out a stringent warning to Muslims, asking them not to "test Hindus' patience". 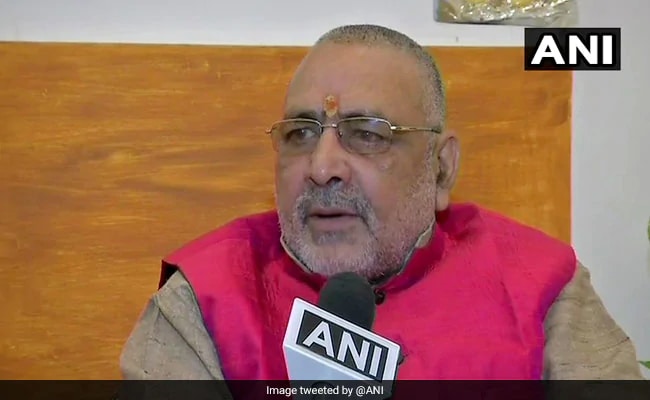 "Earlier, Deoband's name was Deovrant. I do not know what it is about this place, it produces people similar to Baghdadi (ISIS chief) and Hafiz Saeed - Mumbai terror attack mastermind and JuD chief. I got to know that both of them were the students of Deoband. I believe that this place is not a temple of learning. In fact, it is a temple of terrorism," Mr Singh had said on Wednesday, when he had gone to meet Seer Swami Brahmananand Saraswati at the latter's ashram.

With regards to the adjournment of the Ram Janmabhoomi-Babri Masjid title suit case by the Supreme Court, the BJP leader sent out a stringent warning to Muslims, asking them not to "test Hindus' patience".

"I want to make an appeal to Muslims that these 100 crore Hindus are also their brothers. You erected three lakh mosques here and no one stopped you. But now don't test Hindus' patience. Lord Ram is my faith and his temple will be made in Ayodhya. Ram is the cornerstone of the faith of Hindus. The Congress has decided to make it a Hindu-Muslim issue. Hindus are running out of patience," he added.

"The statement by Giriraj Singh is baseless and unfortunate. He should take back his comment and apologise not only to a particular community but to the whole nation. The way he has given the baseless statement shows his wrong thinking. If he believes that Madarsas are the hub of terrorism, then, I would like to suggest him to take admission to a Madrasa to see what kind of teaching the students get in this institution. We teach students love and respect for our nation," he told ANI.

Another cleric, Mufti Asad Kasami, challenged Mr Singh to prove that Baghdadi and Hafiz Saeed used to be students of Darul Uloom Deoband. The cleric also said that the institution always stood by the country in the fight against terrorism.

"Through media, I would like to say that Union Minister Giriraj Singh always gives such kind of irresponsible statements to spoil the atmosphere in the country. His only aim is to do divisive politics on Hindu-Muslim. I want to challenge Giriraj Singh to show proof that Baghdadi and Hafiz Saeed were the students of Deoband. The Deoband has always stood along with the country to fight against terrorism. Hence, such statements are very disheartening and unfortunate," he said.