The memes had already been very popular where the topics ranged from heat to BJP's election wins. 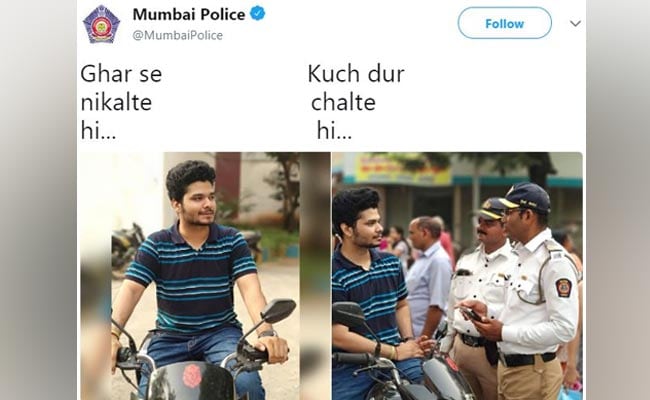 New Delhi: Meme lovers have a new favourite. The hilarious Ghar Se Nikalte Hi Memes are the new celebrated ones on social media. And they have also caught the eye of the Mumbai Police whose tweet has now gone viral. Who knew a popular 90's Bollywood song will get popular today as a meme?

The Mumbai Police's tweet is about a man who is on a bike without a helmet. That is the first part of the meme, where he has just stepped out of the house. The second picture is him being caught by cops and being fined. The meme not only makes us aware about the law (wearing a helmet) but is also funny and not too preachy. Take a look at the viral meme:

The memes had already been very popular where the topics ranged from heat to BJP's election wins. The Mumbai Police tweet has increased their popularity even further. Let's look at some of the hilarious Ghar Se Nikalte Hi memes:

When the summer makes you go mad:

This summer heat I tell you

On a Friday evening:

me on a Friday evening...

On BJP's progress in India:

'Welcome to the real world!' This is definitely not what friends are for and if they are, they aren't your friends at all #HoshMeinAaopic.twitter.com/0GJb2AlKMA

Or this one about neighbourhood aunties:

We have an added advantage of Alert Citizens as "Force Multiplier"#NeighbourhoodWatchpic.twitter.com/jxi0MOnGgd