Read inOther Languages
This Article is From May 22, 2019

Representatives of political parties can join the guards in the 24-hour vigil at strongroom or watch a CCTV feed from cameras monitoring the area.

Congress workers have been sitting outside EVM strongrooms in Chandigarh since Monday.

Digvijaya Singh, senior Congress leader and the party's candidate in Madhya Pradesh's Bhopal, and his wife, visited voting machine store room at the central jail in the city last night.

In Uttar Pradesh, Congress workers sat outside the EVM store rooms in Meerut and Raebareli, the stronghold of the Gandhis from where Sonia Gandhi is seeking a re-election.

22 opposition parties met the Election Commission on Tuesday and flagged the movement of voting machines in five states after multiple videos surfaced.They also wanted the VVPAT (Voter Verified Paper Audit Trail) machines be considered first. Earlier in the day, the Supreme Court had dismissed a request seeking 100 per cent matching of paper trail slips with the electronic voting machines during counting, calling it "nonsense". 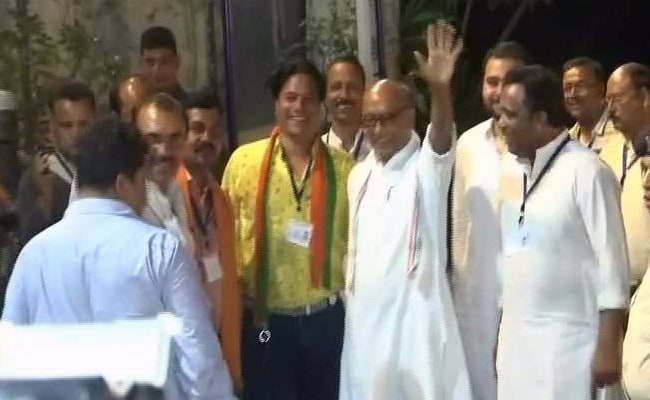 Digvijaya Singh and his wife visited an EVM strongroom in Bhopal on Tuesday night.

In Chandigarh, Congress workers have been sitting outside strongrooms since Monday to ensure there was no movement of voting machines.

Representatives of political parties can join the guards in the 24-hour vigil or watch a CCTV feed from cameras monitoring the area.

Representatives of the candidates can also inspect the machines when they are taken to the counting room where each is put on a table.

DMK leader M Kanimozhi said she saw voting machines being moved in Thoothukudi district. She said she has deployed agents who are watching the CCTV images streamed from the outside a strongroom. "The movement of EVMs has created suspicion and fear psychosis among the cadre and the party We have deployed agents who keep vigil via CCTV," she said.

Mumbai Congress chief Milind Deora wrote to the election body chief in Maharashtra on Tuesday, demanding that the vigilance around the storage rooms be increased and if possible, passwords of the CCTV cameras in the strongrooms be shared with the candidates so that they too can monitor the situation. Mr Deora is the party's candidate in Mumbai South.

The Congress's Mumbai North West candidate Sanjay Nirupam visited the counting centre in Goregaon east and monitored the safety and security status there.

"The next two nights before the counting day are critical. All party workers and the people must keep vigil to find out whether the BJP activists are indulging in any mischief," he said on Tuesday.

Shashi Tharoor, the Congress lawmaker from Thiruvananthapuram who is seeking re-election, visited campuses were voting machines are stored. "There are no concerns in Kerala. But we are very worried about a few states, about why these machines are being moved just a day or two before the counting," he said.

Congress workers in Assam kept vigil on the road leading to a store room of voting machines in Kamrup.

During a meeting of BJP and its allies in the capital on Tuesday night, Prime Minister Narendra Modi expressed concern over what he termed "needless controversy" by the opposition over electronic voting machines.

Exit polls have indicated that the BJP and its allies will get a comfortable majority.

The counting of votes will be held from 8 am on Thursday and the results are expected to be declared the same evening.

Covid May Have Claimed As Many As 5 Million Lives In India: Experts