Congress Candidate List 2019 Delhi: Sheila Dikshit, who took over as the chief of the Delhi Congress earlier this year, will contest from North East Delhi

Sheila Dikshit, three-time Delhi Chief Minister, is among the candidates the Congress named today for six of the seven seats in Delhi for the national election, signaling that a tie-up with Aam Aadmi Party is no longer on the table. The party has left out just one seat, South Delhi, where its planned candidate Ramesh Kumar, the brother of 1984 anti-Sikh riots accused Sajjan Kumar, has provoked anger from Sikh groups.

The list is out just two days before nominations end for the Delhi election on May 12.

Kapil Sibal is missing from the list; the senior Congress leader and former union minister reportedly decided against contesting from his traditional seat Chandni Chowk. Sources say he was reluctant to fight in a triangular contest with the BJP and AAP, which may be the case for other seats too.

Sheila Dikshit, who took over as the chief of the Delhi Congress earlier this year, will contest from North East Delhi. Her predecessor Ajay Maken will contest as the Congress candidate from New Delhi.

Sheila Dikshit was asked to choose where she wanted to contest and she reportedly preferred North East Delhi over East Delhi. 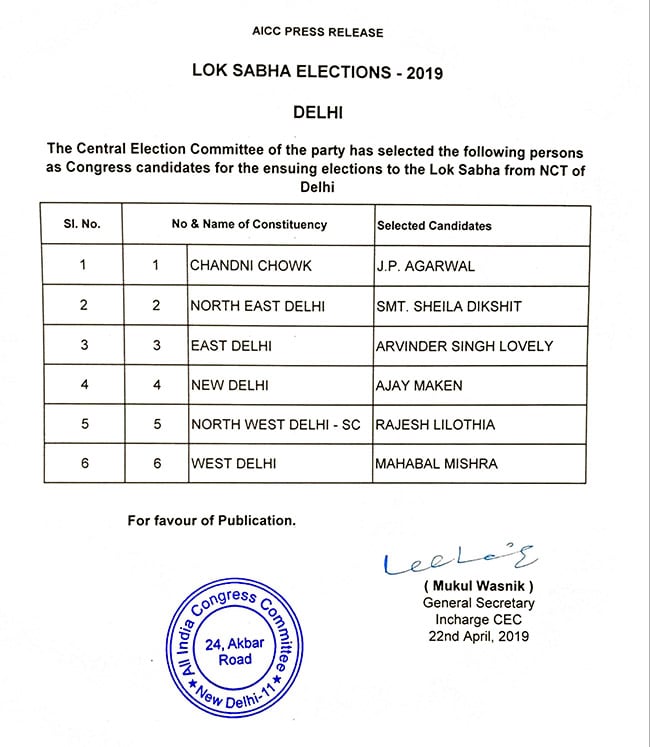 Arvind Kejriwal's AAP had announced names of candidates for all seven seats weeks ago, even when it was in the middle of hard negotiations with the Congress for a tie-up in Delhi.

One of the AAP candidates filed his nomination on April 18. The party stalled the nomination for three candidates in Delhi as talks continued for a joint fight against the BJP.

In the 2014 national election, the BJP won all seven seats in Delhi.

Talks between the two parties crashed over AAP's insistence that the Congress agree to share seats in Haryana, Chandigarh and Punjab.

The Congress on Sunday announced its candidates for five seats in Haryana. This was after AAP named three candidates in alliance with Dushyant Chautala's JJP.

The BJP also won all five seats in Haryana.