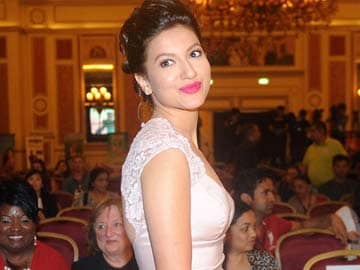 "I Thank family for support. I am big fan of the show. I did not expect to come so far... till the finale," said Gauhar, who had won critical acclaim for her role in the film 'Rocket Singh: Salesman of the Year' (2009).

During her stint on the show, Gauhar's romance with fellow contestant Kushal Tandon caught everyone's attention and the two openly declared their love for each other.

Last season, television actress Urvashi Dholakia had won the show. In the past, small screen actresses Juhi Parmar and Shweta Tiwari have come out on top in the show.

Tanishaa won hearts with her dignity and calmness and hardly instigated fights. She made headlines for her closeness to ex-inmate Armaan Kohli.

"I did not expect so much love. It was an unbelievable experience. I took a risk and it paid off. I made good relations on the show," Tanishaa said.

"I am happy to see my mother here. I love you a lot and missed you," she said.

Tanishaa's mother, Tanuja, who was also present for the finale, appeared emotional.

"I am proud of her. For me, she has won the show, even if she doesn't win. I used to see the show everyday. As I couldn't contact her, seeing the show was the only medium. Whenever she cried on the show, I also cried," said the yesteryears' actress.

Besides Gauhar, other contestants left in the house for the finale were Tanishaa, Sangram Singh and Ajaz Khan.

Sangram came out of the house first and was followed by Ajaz, leaving Gauhar and Tanishaa for the final reckoning.

While Pratyusha Banerjee and Kamya Punjabi danced to the beats of 'Dabangg 2's' 'Fevicol Se' with Salman Khan on the occasion, Elli Avram, one of the most-liked contestants on the show, danced to oldies like 'Yeh Mera Deewanapan Hai' and 'Hawa Hawai'.

Armaan Kohli seemed to be in a good mood and danced with Salman on 'Bodyguard's' 'Desi Beat' song.

The show featured superstar Salman in two roles, as 'Devil' and also 'Angel'.