The poster, apparently put up by the party's local leaders, dubbed BJP MP from Bhopal, Pragya Thakur "Hinsa ki Pujarin (worshipper of violence)" - pitching her as an antithesis of the Mahatma. 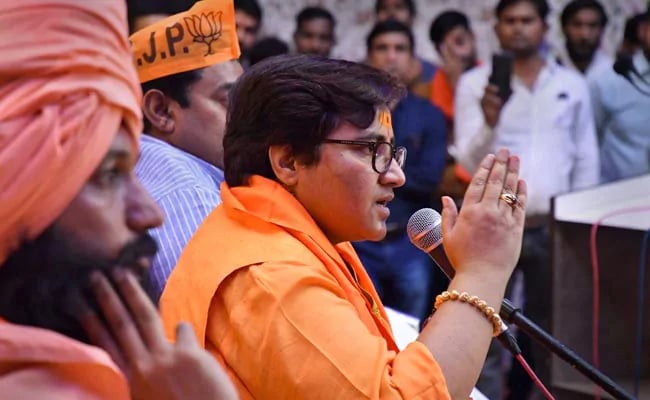 On the 150th birth anniversary of Mahatma Gandhi, leaders of the Madhya Pradesh Congress displayed a poster attacking the BJP's Pragya Singh Thakur, who had praised the Mahatma's assassin, Nathuram Godse during her Lok Sabha campaign earlier this year.

The poster, apparently put up by the party's local leaders Vivek Khandelwal and Girish Joshi, dubbed the BJP parliamentarian from Bhopal "Hinsa ki Pujarin (worshipper of violence)" - pitching her as an antithesis of the Mahatma.

Revered as the Father of the Nation, Mahatma Gandhi is an international icon of peace and non-violence.

It also questioned the BJP's inaction against Pragya Thakur's remarks. "Will the party that reveres Godse ever expel Pragya Thakur? The BJP, who are who are into such drama on Gandhi Jayanti, should answer," the poster read.

Ahead of this year's Lok Sabha election, Pragya Thakur -- accused in the 2008 Malegaon blasts -- had called Nathuram Godse, a patriot, triggering a huge political controversy. 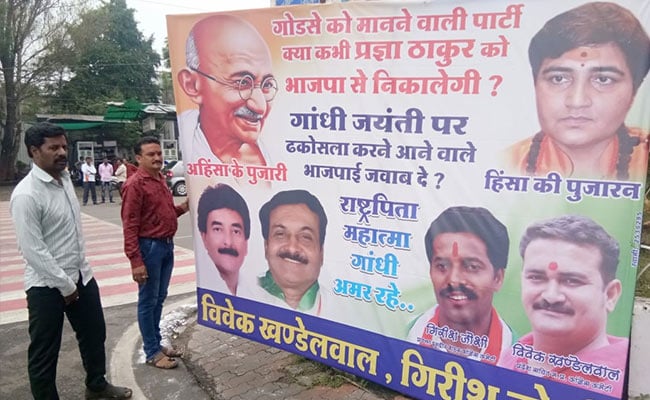 The poster was put up near the Gandhi statue at Indore's Regal Square.

"Nathuram Godse was a deshbhakt (patriot), is a 'deshbhakt' and will remain a 'deshbhakt'. People calling him a terrorist should instead look within... such people will be given a fitting reply in the election," she had said while on the campaign trail of the highly polarised election.

Her remarks not only drew severe backlash from the opposition, but were also publicly censured by Prime Minister Narendra Modi. The BJP officially distanced itself, saying they condemned the statement and demanded a "public apology". Days later, Pragya Thakur apologised.

After the election, Pragya Thakur again courted controversy when she told BJP workers at a meeting that she wasn't "elected to get drains and toilets cleaned". Many later accused her of denigrating the Prime Minister's Swachch Bharat Abhiyan, a movement inspired by Mahatma Gandhi.

The 49-year-old has become known for her controversial comments. In August, after the deaths of former Union ministers Arun Jaitley and Sushma Swaraj, she had accused the opposition of using "marak shakti" (occult powers) to harm BJP leaders, drawing much criticism.