Gandhi Jayanti 2019: PM Modi will visit the Sabarmati Ashramin Gujarat where he will declare the country open defecation-free (ODF). 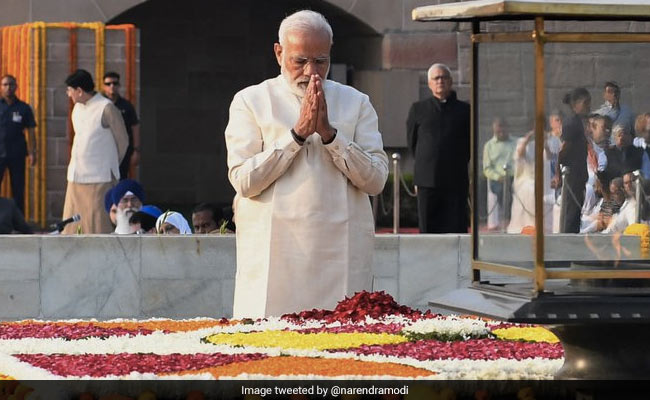 Prime Minister Narendra Modi kick-started countrywide celebrations to mark the 150th birth anniversary of Mahatma Gandhi today. PM Modi, who launched the 'Swachh Bharat' campaign in 2014, will declare the country open defecation-free at the Sabarmati Ashram in Gujarat in the evening.

The BJP and the Congress, which are making efforts to claim Mahatma Gandhi's legacy, have planned various events across the country on Gandhi Jayanti. Leaders cutting across party lines visited Rajghat, the resting place of the Mahatma, to pay homage to Gandhi.

PM Modi, who has a packed schedule, began his day with a visit to Rajghat, and paid floral tribute. "Tributes to beloved Bapu! On #Gandhi150, we express gratitude to Mahatma Gandhi for his everlasting contribution to humanity. We pledge to continue working hard to realise his dreams and create a better planet," the Prime Minister tweeted.

In a short video on Mahatma Gandhi, PM Modi said his message of peace is still relevant to the world community. He also referred to the seven habits Gandhi had cautioned people about. These are: wealth without work, pleasure without conscience, knowledge without character, visit without ethics, science without humanity, religion without sacrifice and politics without principles.

Tributes to beloved Bapu! On #Gandhi150, we express gratitude to Mahatma Gandhi for his everlasting contribution to humanity. We pledge to continue working hard to realise his dreams and create a better planet. pic.twitter.com/4y0HqBO762

The Prime Minister will next go to parliament where he will pay floral tributes to both leaders. Later in the evening, he will fly to Ahmedabad and visit the Sabarmati Ashram where he will declare the country open defecation-free (ODF) in the presence of over 20,000 village heads, a BJP leader was quoted as saying by news agency PTI.

Congress leaders, meanwhile, will hold marches across the country. Party president Sonia Gandhi will lead one such march in Delhi. While Rahul Gandhi will lead a similar one in the capital, Priyanka Gandhi Vadra hold a march in Lucknow.