Gandhi Jayanti 2019: PM Modi said a clean environment would be a fitting tribute to Mahatma Gandhi. 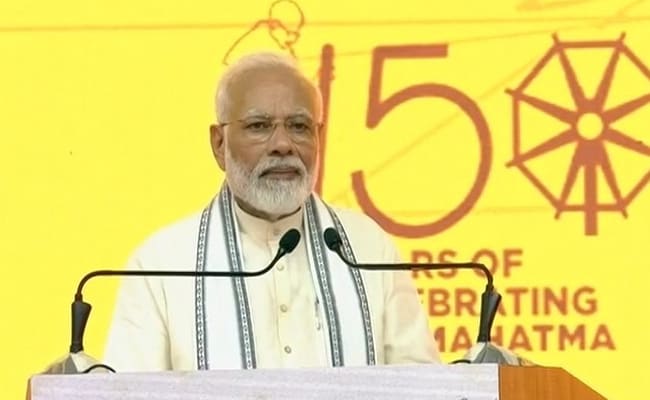 Earlier today, Prime Minister Narendra Modi paid homage to Mahatma Gandhi at Raj Ghat, the resting place of the Father of the Nation, at 7.20 a.m, and then proceeded to the Vijay Ghat, the resting place of former PM Lal Bahadur Shastri, who also shares his birthday with Mahatma Gandhi. Former Prime Minister Manmohan Singh and Congress president Sonia Gandhi also paid floral tributes to the Father of Nation.

PM Modi arrived at the Ahmedabad airport around 6 pm and went to the Sabarmati Ashram. where Mahatma Gandhi lived for several years.

Here are the Live Updates of Gandhi Jayanti celebrations:

Oct 02, 2019 20:44 (IST)
Mahatma Gandhi cared about sanitation, environmental conversation and protection of animals: PM
Sanitation, environmental protection and animal protection of animals were subjects important to Gandhiji. Plastic is a major threat to these three. We have to achieve the goal of making the country free of single-use plastic by the year 2022
Oct 02, 2019 20:40 (IST)
Swachh Bharat mission created more than 75 lakh jobs: PM
The 'Swachh Bharat' mission has generated new employment opportunities for people, especially in rural areas
Oct 02, 2019 20:34 (IST)
Feel Bapu's Presence Everytime I Come To Sabarmati: PM
I went to the Sabarmati Ashram before coming here. I've been there a lot of times. Every time, I feel Bapu's presence there. Today, there was a new energy there.
Oct 02, 2019 20:02 (IST)
Gandhi Jayanti Celebrations In Beijing 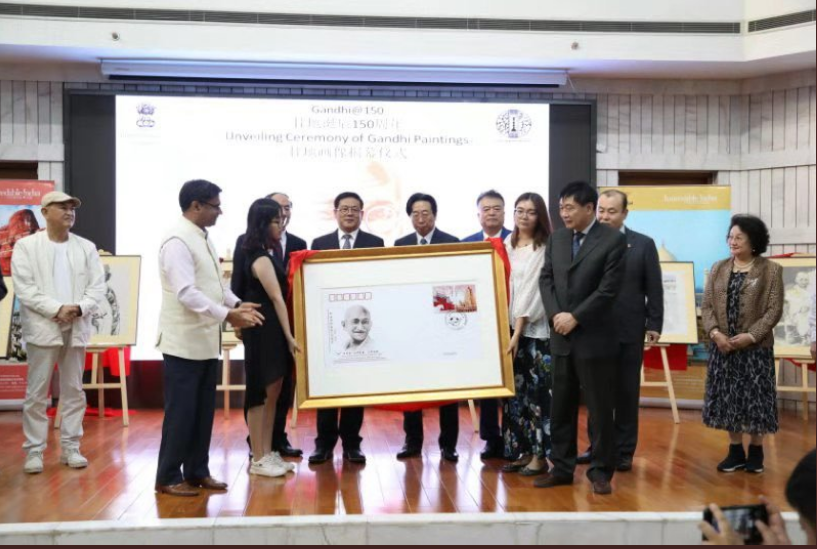 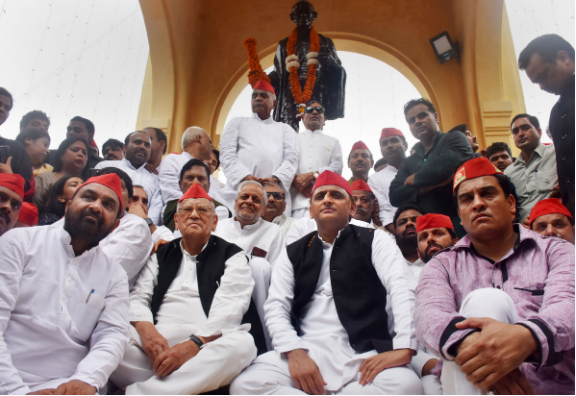 Oct 02, 2019 19:28 (IST)
Thousands of students at the 'Global Student Solar Assembly' on the occasion of the 150th birth anniversary of Mahatma Gandhi in New Delhi 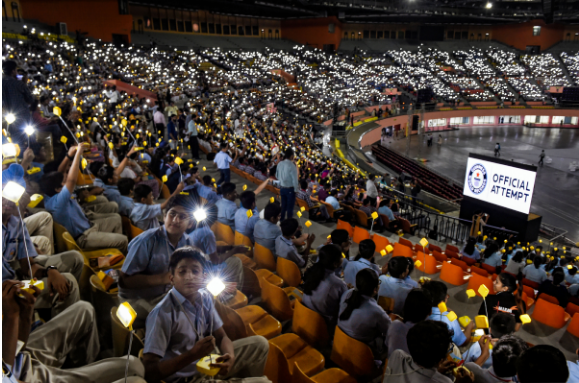 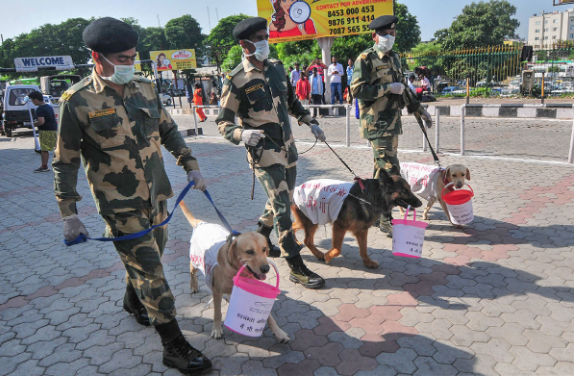 Oct 02, 2019 18:33 (IST)
Mahatma Gandhi's Teachings Solution To Every Problem: PM
Mahatma Gandhi's 150th anniversary has been marked at the United Nations with immense enthusiasm. Take any problem the world faces, the teachings of Mahatma Gandhi offer solutions to those challenges
Oct 02, 2019 18:25 (IST)
India Setting Example With Positive Changes: PM Modi
"India's stature is rising at world stage. Respect for India is increasing all over. One can experience the change. The world can see that India is at the forefront of several positive changes," PM Modi said
Oct 02, 2019 18:13 (IST)
PM Modi in Ahmedabad 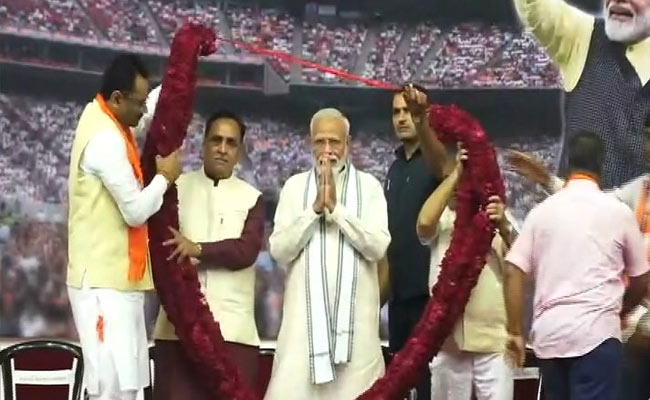 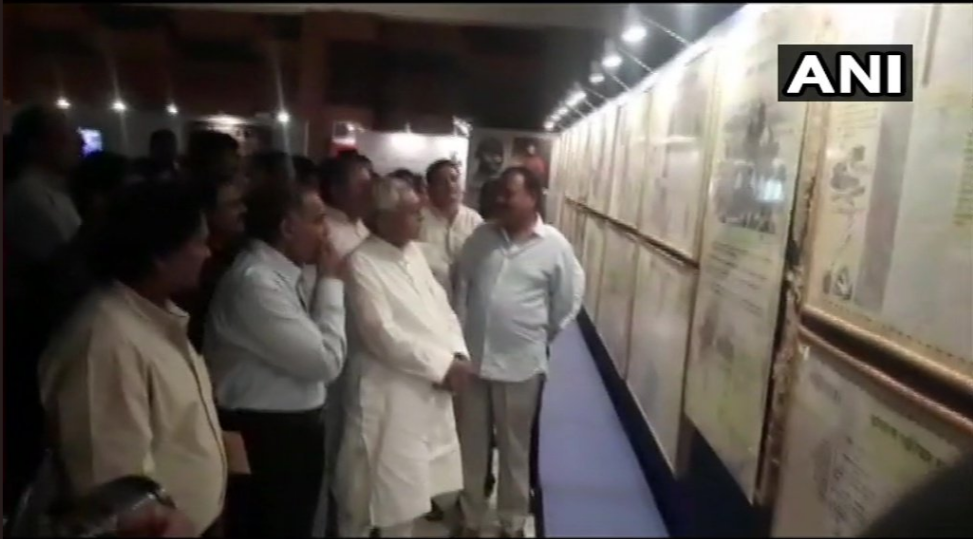 BJP President Amit Shah during 'Gandhi Sankalp Yatra' in Delhi, earlier today: Modi ji has resolved to make country free of single use plastic, and it's the responsibility of everyone, including BJP workers, to make it a mass movement. #GandhiJayantipic.twitter.com/tfhkZSkoFe

Mahatma Gandhi's Philosophy At Core Of Our Work: UN Secretary-General
Secretary-General of UN Antonio Guterres on Wednesday remembered Mahatma Gandhi on his 150th birth anniversary and said that the leader pioneered successive non-violent movements that changed history, and his philosophy is at the core of work at the UN."
Oct 02, 2019 13:32 (IST)
Gujarat celebrates Gandhi Jayanti with prayers, cleanliness drives 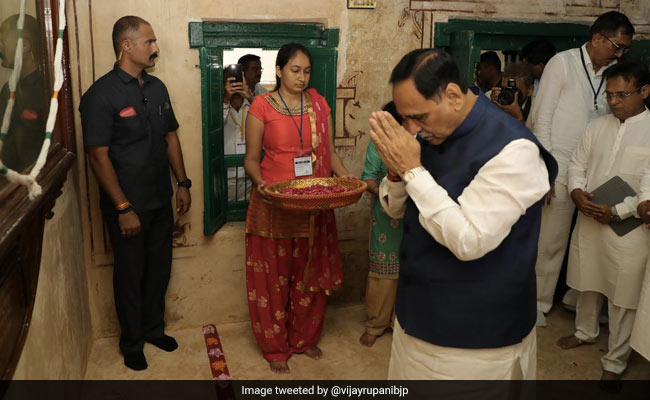 Prayer meets were organised at several places in Gujarat, including Sabarmati Ashram in Ahmedabad, on Wednesday morning to pay tributes to the Mahatma.
A large number of primary school students gathered at Hriday Kunj, Gandhi''s home at the Sabarmati Ashram, to attend an all-faith prayer meet organised on the occasion.
They expressed their views on the relevance of Gandhi's teaching of non-violence in today''s world.
Members of the ashram's trust, eminent Gandhians and other dignitaries were present on the occasion.
Chief Minister Vijay Rupani attended a prayer meet at Porbandar''s Kirti Mandir, the house where Mahatma Gandhi was born on this date in 1869.
Oct 02, 2019 13:28 (IST)
Spinning session, bhajans at place where Mahatma Gandhi stayed while in Mumbai
A spinning session and singing of bhajans were among the events organised at Mani Bhavan, where Mahatma Gandhi stayed while in Mumbai, on Wednesday to mark his 150th birth anniversary.
The day began with a khadi spinning session at 7.30 am
followed by an hour of prayer and bhajans, Executive Secretary
of Mani Bhavan Meghshyam Ajgaonkar said.
Oct 02, 2019 13:19 (IST)

Participated in 'Swachch Bharat Abhiyan' on the occasion of 150th #GandhiJayanti in Delhi.

As the world facing the challenges of climate change & other environmental issues, it is time to follow the path shown by Gandhiji to make this country and the planet a better place. pic.twitter.com/FJqlv0LcPI

Oct 02, 2019 13:15 (IST)
On Gandhi Jayanti, PM Modi proposes "Einstein challenge" to the Mahatma
PM Modi has written an opinion piece in The New York Times on Gandhi Jayanti.
In the article, PM Modi says that Mahatma Gandhi envisioned Indian nationalism as one that was never narrow or exclusive but one that worked for the service of humanity.
Quoting Albert Einstein, PM Modi proposed the "Einstein Challenge" to ensure that ideals of the Mahatma are remembered by future generations.
"As a tribute to Gandhi, I propose what I call the Einstein Challenge... How do we ensure the ideals of Gandhi are remembered by future generations? I invite thinkers, entrepreneurs and tech leaders to be at the forefront of spreading Gandhi's ideas through innovation," PM Modi writes in the 931-word piece titled "Why India and the World Need Gandhi".
PM Modi, in his article, says Gandhi had the unique ability to become a bridge between some of the greatest contradictions in human society.
Oct 02, 2019 12:54 (IST)

In Tribute To Mahatma Gandhi, Milind Deora Refers To U2's Bono and The Edge's Ahimsa Quote
Congress leader Milind Deora today tweeted a video of members of the iconic Irish brand, U2, paying homage to Mahatma Gandhi, as the nation celebrated the 150th anniversary of the Father of the Nation."
Oct 02, 2019 11:11 (IST)

Oct 02, 2019 10:53 (IST)
Mahatma Gandhi showed love for non-violence is only way to defeat hatred: Rahul Gandhi
Several top Congress leaders, including party president Sonia Gandhi, on Wednesday paid tributes to Mahatma Gandhi on his 150th birth anniversary with Rahul Gandhi saying that the Father of the Nation showed that love for all living beings and non-violence is the only way to defeat bigotry and hatred.
The Congress president and former prime minister Manmohan Singh were among those who paid floral tributes to the father of the nation.
Taking to Twitter, former party president Rahul Gandhi said: "On his 150th Jayanti, my tributes to Mahatma Gandhi Ji, the ''Father of the Nation'', who through his words & deeds, showed us that love for all living beings & non violence is the only way to defeat oppression, bigotry & hatred."
Oct 02, 2019 09:10 (IST)

Gandhi Ji embodies the kind of change that is possible when ordinary people come together to do extraordinary things.

Today as we celebrate his 150th birth anniversary we must make a pledge to continue his legacy of Satya & Ahimsa. #Gandhi150pic.twitter.com/ptn8bnM4t3

Oct 02, 2019 08:34 (IST)
Gandhi Jayanti celebrations: PM Modi to declare India open defecation free today
Prime Minister Narendra Modi will visit the Sabarmati Ashram in the evening. Several events will be organised in the city and other parts of Gujarat today as part of the sesquicentennial year of Mahatma Gandhi's birth anniversary.
PM Modi will arrive at the Ahmedabad airport around 6 pm, and will be greeted by BJP workers at a function organised there by the party's city unit.
He will then visit the Sabarmati Ashram to pay tributes to the Father of the Nation, state BJP president Jitu Vaghani said.
From there, he will go to the Sabarmati Riverfront, where he will declare the country open defecation-free (ODF) in the presence of over 20,000 village heads, he said.
People associated with Gandhian institutions, high court judges, Padma awardees, students, educationists and village-level sanitation workers have been invited for the function.
Oct 02, 2019 08:28 (IST)
Sonia Gandhi, JP Nadda pay tribute at Rajghat
Congress interim President Sonia Gandhi and BJP working President JP Nadda paid tribute to Mahatma Gandhi at Rajghat on the occasion of his 150th birth anniversary.
Former Prime Minister Manmohan Singh and senior BJP leader LK Advani also arrived at Raj Ghat to pay tribute to the Mahatma.
A large number of events are lined up across the nation, as the country observes the 150th birth anniversary of Mahatma Gandhi today.
Both BJP and Congress have made detailed plans including foot marches, cleanliness drive etc to mark the occasion.
Oct 02, 2019 08:24 (IST)
Earlier today, PM Modi tweeted to express gratitude to Mahatma Gandhi for his everlasting contribution to humanity.
Oct 02, 2019 07:35 (IST) 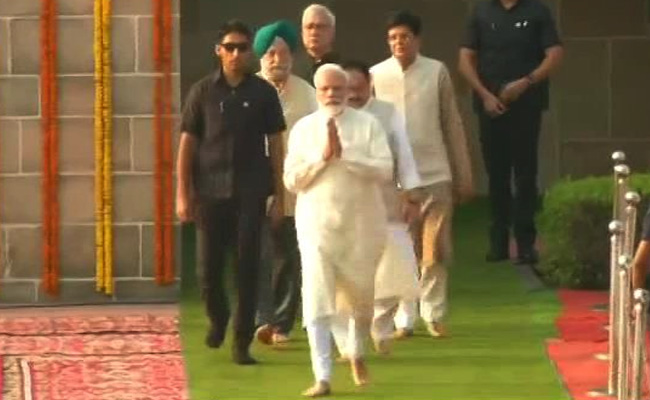 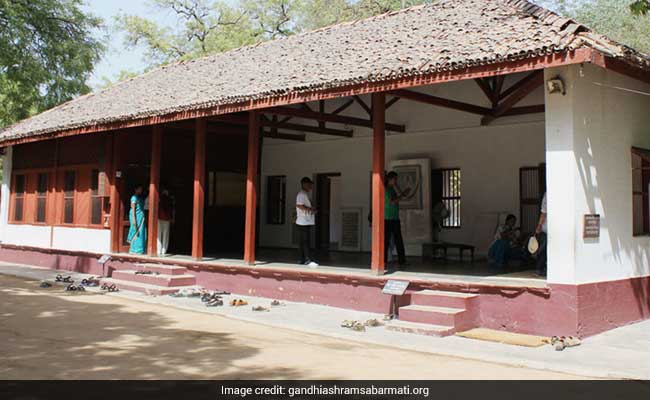 Prime Minister Narendra Modi will visit the Sabarmati Ashram on the occasion of the 150th birth anniversary of Mahatma Gandhi. Several events will be organised in the city and other parts of Gujarat today as part of the sesquicentennial year of Mahatma Gandhi's birth anniversary.
Oct 02, 2019 07:15 (IST)
Congress leaders, led by party's interim President Sonia Gandhi, will lead a Gandhi Sandesh padyatra as part of a week-long celebration to mark the 150th birth anniversary. The march will start at 9:30 am from the Delhi Pradesh Congress Committee officer.
Oct 02, 2019 07:15 (IST)
A large number of activities have been planned for the 150th birth anniversary of Mahatma Gandhi today.  PM Modi will kickstart the countrywide celebrations with a visit to Rajghat, the resting place of the Father of the Nation, at 7.20 a.m. He will also visit Vijayghat, the resting place of former PM Lal Bahadur Shastri, who also shares his birthday with Gandhi.