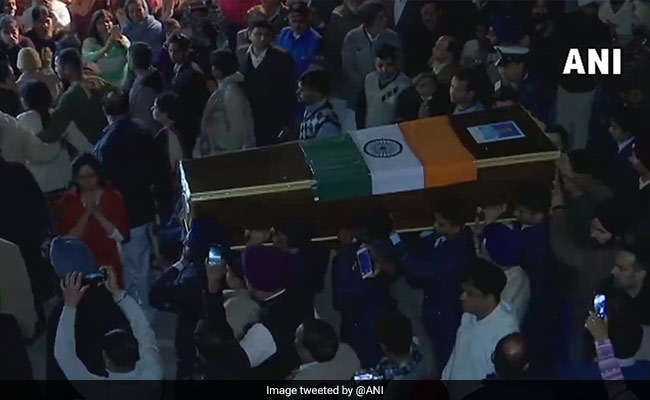 The funeral for Squadron Leader Siddharth Vashisht, who died in a helicopter crash in Jammu and Kashmir's Budgam district, were performed in Chandigarh on Friday with full military honours.

The remains of the officer had arrived at the Air Force station in Chandigarh on a service aircraft on Thursday. It was taken to the cremation ground from his residence in Sector 44 on a bedecked IAF vehicle.

In uniform, the officer's wife, Aarti, who is also a squadron leader, laid a wreath before the last rites were performed. Siddharth Vashisht's father lit the funeral pyre.

The Indian Air Force conducted a gun salute in the presence of its officials, the civil administration and a large number of people who turned up to pay their last respects.

Siddharth Vashisht, 31, was a fourth-generation member from his family in the armed forces. He was commissioned in the IAF in 2010 and last month, he received commendation for his role in the rescue operation during the Kerala floods.

An IAF helicopter crashed in Budgam district of Jammu and Kashmir Wednesday, killing both its pilots and four others on-board besides a local resident.