Rahul Gandhi said, "The man who came to remove corruption has himself given Rs 30,000 crore to Anil Ambani. The fun has just begun, things are set to turn more interesting." 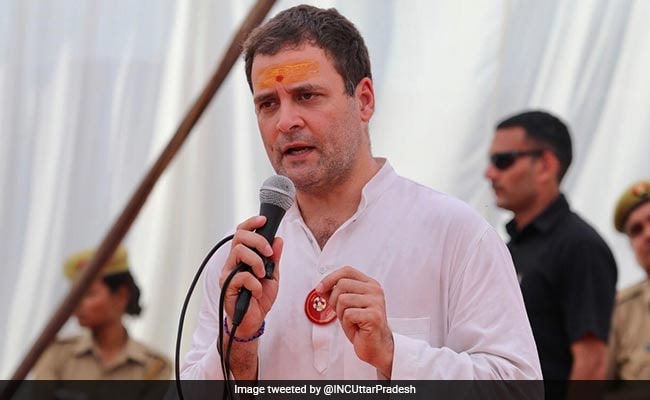 Rahul Gandhi said PM Modi is not a chowkidar (gatekeeper), but a chor (thief).

Rahul Gandhi's latest barb at Prime Minister Narendra Modi on the Rafale jet deal controversy, delivered with the promise that "the fun has just begun", had a furious BJP flinging back a - "shame".

The Congress president was speaking to social media workers of his party in his parliamentary constituency Amethi in Uttar Pradesh last night when he fired a new, virulent broadside against PM Modi.

"The man who came to remove corruption has himself given Rs 30,000 crore to Anil Ambani. The fun has just begun, things are set to turn more interesting. In the next two-three months you will have fun after we will show you Narendra Modi's work - Rafale, Vijay Mallya, Lalit Modi, Demonetisation, Gabbar Singh Tax. All of it is theft. One by one, we will show that Narendra Modi ji is not a chowkidar (gatekeeper), but a chor (thief)," Rahul Gandhi said. A video of the comment was recorded and shared with local reporters.

Union Minister Ravi Shankar Prasad said nothing else could be expected from a leader whose "entire family" is buried in scams.

"It's a matter of shame for the Congress that a person like Rahul Gandhi, who is irresponsible and is a liar, is their president. We can't expect anything else from a leader whose entire family is buried in scams, be it Bofors or National Herald," said Mr Prasad.

"In the history of independent India, no national party president has ever made such comments about a prime minister," he said.

The Rafale row took a new turn last week with ex-French president Francois Hollande's comment in an interview that the Indian government suggested Anil Ambani's Reliance Defence as an offset partner for Rafale maker Dassault, that France was given no choice. Hollande later backtracked in another interview and said only Dassault Aviation can comment on why Reliance Defence was chosen as the Offset partner.

The deal to buy Rafale fighters was signed by the BJP-led government with France in 2016 after the previous Congress government's negotiations were scrapped. The UPA's plan was to buy 18 off-the-shelf jets from France's Dassault Aviation, with 108 others being assembled in India by the state-run Hindustan Aeronautics Limited (HAL) in Bengaluru.

On Monday, the BJP claimed that the Congress-led UPA government scrapped the Rafale deal with France as Rahul Gandhi's brother-in-law Robert Vadra's company was not made a part of the deal.