From Mythology To Adolf Hitler, Andhra MP Plays A Range Of Characters

While raising his party's demand, Chittoor MP Naramalli Sivaprasad had once called PM Modi as the "bad student of the class" 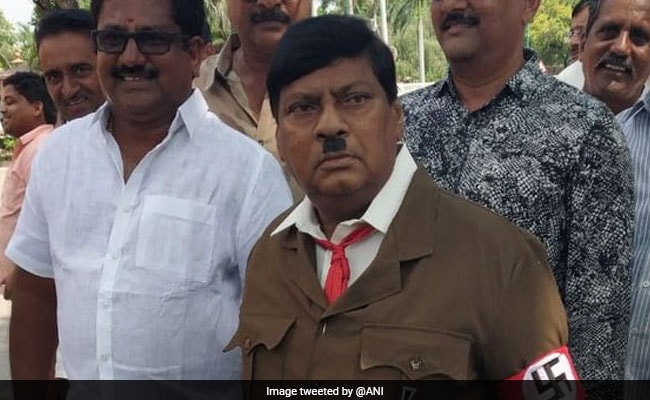 Naramalli Sivaprasad showed up as Adolf Hitler in the parliament today.

A Telugu Desam Party (TDP) lawmaker today dressed as German dictator Adolf Hitler to the parliament to demand special status category status for Andhra Pradesh. As the TDP leaders protested near the Mahatma Gandhi statue, Naramalli Sivaprasad showed up as Adolf Hitler -- his look complete with Nazi uniform, toothbrush moustache and a stick in hand.

This isn't the first time that Naramalli Sivaprasad has resorted to theatrics to register his protest. He loves to play dress-up. A few days ago, he wore a long saffron robe to create Sri Sathya Sai Baba's look.

Before that he threw a gold silk drape around his shoulders, tied a yellow waist band and played an iktara, a one-string instrument associated with saint-poets. He was Annamayya, a famous poet and devotee of Lord Balaji.

In the past, he had dressed as a variety of characters. His creative costumes and props have been successful in grabbing the attention. From sage Vishvamitra, Parashurama and Narad Muni from mythology to a washerman, Swachh Bharat worker, a student and even a woman, he never runs out of ideas.

While raising his party's demand, the Chittoor MP had once called PM Modi as the "bad student of the class".

A qualified doctor, Mr Sivaprasad has acted in movies as well. He became a lawmaker in 1999 and has served as a minister in Andhra Chief Minister Chandrababu Naidu's cabinet.

Meanwhile, the TDP members have been demanding the implementation of the Andhra Pradesh Reorganisation Act. They held placards featuring Prime Minister Narendra Modi and Chandrababu Naidu's photographs. Some placards had "We want Special Status for Andhra Pradesh" written in Telugu.

Talking about the placards, the TDP's Jayadev Galla, whose opening speech during the no-confidence motion turned him into a popular politician, said, "It says, 'Everything he says is false and everything he does in false.' We are saying that he is not a man to be trusted. He doesn't keep his words. He makes promises and doesn't honour them. 'Jumla' seems to be the right word in Hindi. In Telugu, we call him 'Mosagadu,' which means to cheat someone."

The 52-year-old Guntur lawmaker added, "Even after the no-confidence motion, our issues have remained the same. We presented all facts and figures. The Prime Minister didn't bother to answer our questions. We have been hearing the same statements for the past several years. We don't have any option left. So we will continue our protest. We cannot let our issues remain unaddressed."