12 people including Territorial Army soldiers are still missing after the June 30 catastrophic landslides at Tupul in Noney district. 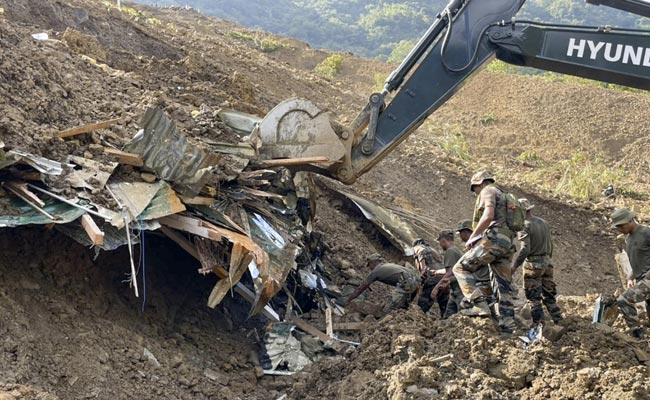 12 people are still missing after the June 30 landslides in another district. (file)

A woman was killed and 10 others seriously injured in a fresh landslide in southern Manipur's Churachandpur district on Friday, officials said. Some body parts of unidentified people were also recovered here on Friday, nine days after the devastating landslide at a railway construction site in another district where 49 bodies were recovered from under the debris during ongoing search operations.

An official of the Churachandpur district administration said that a 49-year-old woman was killed and 10 others including five women were seriously injured when a passenger vehicle with 12 persons on board came under the debris of a landslide on Friday.

The incident took place at the Tipaimukh road along the National Highway 150 between the Santing and Saihuan villages, around 80 km from the district headquarters. The injured were shifted to the hospital.

So far, 49 bodies, including 32 of Territorial Army soldiers and the remaining of local people and railway workers, have been recovered and search operations are underway despite inclement weather to locate the 12 still missing.

"Due to the uncertain road conditions, the NH-37 between the Tupul and Namduanjang villages was closed by the Deputy Commissioner for all vehicles, except those carrying emergency supplies. Noney district police shall give effect to this order and enforce it strictly in the interest of public order and safety," an official said.

The "Through Wall Radar", and search and rescue dogs were inducted to hasten the search operation even as many excavators are being used to pull out bodies from the Ijei river and the debris.