Ahmed Adeeb, 37, became the youngest vice-president of the island country in 2015. The same year, he was sacked after being arrested in connection with a bomb attack targeting then president Abdullah Yameen 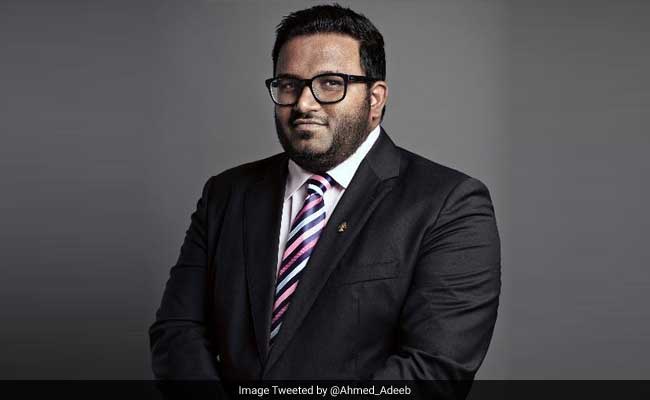 Ahmed Adeeb, 37, became the youngest vice-president of the island country in 2015

Ahmed Adeeb, former vice-president of the Maldives, was today stopped by intelligence agency officials from entering India via a ship located off the coast of Tuticorin in Tamil Nadu. According to a statement by the Ministry of External Affairs, he was not permitted entry because he did not have the proper travel documents.

"There are designated entry points through which foreigners are allowed entry into India. The entry is facilitated on the basis of appropriate valid travel documents. In the instant case, since he was not entering India through a designated entry point and did not possess the valid document, he has not been permitted entry into India," Raveesh Kumar, the ministry's spokesperson, said.

"Ahmed Adeeb, who was under house arrest in Maldives, has said he wants to seek political asylum in India due to the political situation back home. He had planned to enter the shores using a boat," police sources told NDTV earlier in the day.

Officials intercepted the barge mid-sea after a tip-off, and Ahmed Adeeb was held on board and not permitted to step foot in India.

Ahmed Adeeb, 37, became the youngest vice-president of the island country in 2015. The same year, he was sacked after being arrested in connection with a bomb attack targeting then president Abdullah Yameen. He was released from jail in May after his conviction was overturned, but still faces corruption charges in a separate trial.

According to investigators, Ahmed Adeeb was secured while on board a barge (a flat-bottomed ship normally used in canals and on rivers) named Virgo 9, which had returned to Tuticorin with a crew of nine in addition to Mr Adeeb. The rest of the crew had valid documents but Mr Adeeb's passport had been confiscated by the Maldives government.

He had earlier served as tourism minister and chair of the Economic Council.

India and the Maldives enjoy a strong relationship, with Maldivian Defence Forces Chief Abdulla Shamaal thanking New Delhi last month for playing the role of a "security guarantor" for peace and stability within the greater Indian Ocean region.

"...our geographies bind us together. Having the greater Indian Ocean region... and the Maldives located right in the middle of the Indian Ocean region makes us natural friends and very close neighbours," Mr Shamaal said at an event in Delhi.

With input from AFP, PTI