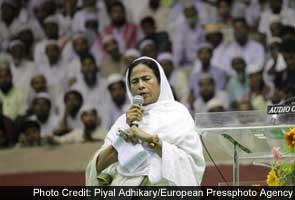 Kolkata: When Mamata Banerjee, a 5-foot-tall dynamo in flip-flops, finally defeated the Communists last year after decades of misrule here, she became one of the most powerful but unpredictable politicians in India. Now the country is left to guess whether she will announce on Tuesday that she intends to try to pull down India's governing coalition.

Ms Banerjee is the chief minister of West Bengal, a state more populous than Germany, and she leads a regional party with 19 representatives in Parliament, a crucial block of votes for the governing United Progressive Alliance. Indeed, she is so influential that Secretary of State Hillary Rodham Clinton paid her a special visit on a recent trip to India, a highly unusual honor for any regional leader.

On Thursday and Friday, the government pushed through several sweeping policy changes, including one that would allow Walmart and Ikea to set up shop in India. Ms Banerjee has repeatedly opposed plans to open India up to more competition. She is in some ways more leftist than the Communists she replaced.

But while she has vowed to protest the changes, it is unclear whether she will go further on Tuesday and push for early elections after she meets with her party leaders. As is often the case with Ms Banerjee, her public statements are often contradictory.

"We are not supporting these anti-people decisions," she posted on her Facebook account on Friday. "We are very much serious about these developments and ready to take hard decisions if these issues are not reconsidered." But the next day, she announced several times at a rally: "We don't want to topple the government."

The 15 months of her administration in West Bengal, of which Kolkata, also known as Calcutta, is the capital, demonstrate just how hopeless it is to try to predict how Ms Banerjee will behave.

Not long after taking office, she announced that a rape victim was lying even though the police found evidence supporting the victim's allegations. She demanded the arrest of a farmer after he asked her a question about rising fertilizer prices.

She angrily marched out of a televised session with college students after accusing those in the audience of being Maoists. Her government arrested a university professor after he forwarded an e-mail with a political cartoon criticizing her. She has claimed that there is a global conspiracy to kill her.

Many are still hopeful that Ms Banerjee, who is often referred to here as 'Didi' (elder sister), will be able to reverse her state's long decline and contribute to India's resurgence. But even her allies are beginning to wonder whether her volcanic temper, off-the-wall statements and increasingly nasty battle with the news media will be her undoing as chief minister, a position akin to that of a governor.

"She never picked up the skills to hold her anger in check so that she can administer and govern," said Laveesh Bhandari, director of Indicus, an economic research firm.

And there is a palpable sense from top ministers in the central government of what seems to be a bad case of "Mamata fatigue." When asked about Ms Banerjee's impending decision, Renuka Chowdhury, a spokesman for the Congress Party, the primary group in the governing coalition, said: "We remain optimistic, while we appreciate her limitations and compulsions."

In her place, Amit Mitra, Ms Banerjee's finance minister, dismissed the many controversies she has been involved in as little more than a tempest in a teapot.

"These are concerns only for the English-speaking upper class," he said. Referring to the Communists, known locally as the CPM, he added: "The CPM would have beat that farmer to death. He got away because she believes in democracy."

Ms Banerjee is a polarizing figure. Her opposition to the government plan, which had been gestating for months, contributed to the near-paralysis of India's national government. A survey of chief executives by a leading business newspaper found that 25 of 50 listed Ms Banerjee as the single biggest stumbling block to India's growth.

But she is still a hero to many in West Bengal, in part because she remains a powerful symbol of integrity. In a country rife with political corruption, Ms Banerjee, who is single, lives in a home no bigger than a two-car garage and wears inexpensive cotton saris and rubber flip-flops. Her official car is a compact Hyundai.

She spent decades fighting a Communist machine that ruled West Bengal for 34 years, and she was physically beaten many times by party cadres, in one instance barely surviving.

"You had to be crazy to fight the Communists like she did. Normal people aren't like that," said one of her own ministers, who asked not to be identified for fear of angering Ms Banerjee. "Unfortunately, this characteristic now is a huge disadvantage to her."

Suzette Jordan became the subject of one of Ms. Banerjee's tirades. Ms. Jordan is a divorced mother of two who was beaten and raped at gunpoint in early February but was so traumatized that she did not report the crime for several days. When she did report it, the police failed to investigate until she complained to a newspaper reporter, after which officers recovered footage from a security camera proving much of her story. (The New York Times generally does not name victims of sex crimes, but Ms Jordan's case is widely known in West Bengal and she asked that her name be used.)

In the midst of the controversy, Ms Banerjee was asked about the case. "The entire incident has been concocted with the motive of maligning the government," she said at the time. "Everything will be revealed in the course of the investigation."

Within hours of Ms Banerjee's allegations, Ms Jordan said her apartment building was surrounded by an angry mob. "There were thousands of people outside my gates," she said. "My daughters were terrified and my mom, who was sick with pneumonia, couldn't help them. None of my friends could get through the crowd."

She stayed with friends until a top female police official announced arrests in the case. Six weeks later, however, that police official was transferred to a less prestigious job, a move that provoked another media outcry.

"It is the prerogative of my government to get the job done by someone who can perform in a better way," Ms Banerjee said when asked about the woman's transfer. "The manner in which personal attacks are being made is a conspiracy and a planted game," she added.

For all the criticism, Ms Banerjee is still popular here, in part because she and Mr Mitra, her finance minister, are seen as the best hope for reversing West Bengal's decades-long decline.

In a lengthy interview in his office, Mr Mitra noted that a stubborn Maoist insurgency in the state had cooled since Ms Banerjee took office, and he predicted that industry would soon flock to West Bengal.

"Mamata Banerjee's biggest calling card to industry is that there is now no one to bribe," Mr Mitra said.

At the same time, however, Ms Banerjee, who opposed forceful land acquisitions by the previous government, refuses to use the state's power of eminent domain to obtain land for industrial plants. In a nation where obtaining even small plots of land can lead to years of legal wrangling, some industrialists said that such a refusal was deadly to West Bengal's economic prospects.

"If they're not going to help you obtain even one speck of land, how are you going to manage it?" asked Aniruddha Lahiri, president of the Chatterjee Group, which has a large petrochemical plant in West Bengal.

Still, Sumit Mazumder, chairman of TIL Limited, a heavy equipment manufacturer, said he is more optimistic about West Bengal's prospects. "Mamata is a very determined lady," he said, "and it's the determined people who get things done."