Mani Shankar Aiyar, who has called Prime Minister Narendra Modi a "neech aadmi" in a new attack, earned a swift riposte from the Prime Minister, who said at an election rally in Gujarat, "They can call me neech(low), but I will keep doing oonche (high) work." Congress vice-president Rahul Gandhi asked Mr Aiyar to apologise to the Prime Minister.

Mr Aiyar was later suspended from the primary membership of the Congress and served show-cause notice for his controversial remarks. "This is the Congress leadership's Gandhian philosophy and a sense of respect towards the opposition," Congress spokesperson Rajdeep Surjewala tweeted, wondering if PM Modi would have "courage to do something similar".

The Congress, PM Modi said as campaigning ended for the first phase of assembly elections, has insulted his home state Gujarat. "Gujarat will reply," he said, also stating, "Yes, I am from the poor section of society and will spend every moment of my life working for the poor, Dalits, Tribals and OBC communities. They can keep their language, we will do our work."

The Prime Minister described Mr Aiyar's comment as an example of the Congress' "Mughal values that teach to demean castes and talk about upper and lower castes."

BJP chief Amit Shah, also campaigning in Gujarat today, said, "Yamraj, Maut Ka Saudagar, Ravan, Gandi Nali Ka Keeda, Monkey, Rabies Victim, Virus, Bhasmasur, Gangu Teli, Goon. These are some words or phrases the Congress has used for PM Modi in the past. Not much has changed. We wish them well. We will continue to serve 125 crore Indians."

With voting in Gujarat on Saturday, the Congress has wasted no time in condemning Mr Aiyar's comments. "BJP and PM routinely use filthy language to attack the Congress party. The Congress has a different culture and heritage. I do not appreciate the tone and language used by Mr Mani Shankar Aiyar to address the PM. Both the Congress and I expect him to apologise for what he said," Rahul Gandhi said. 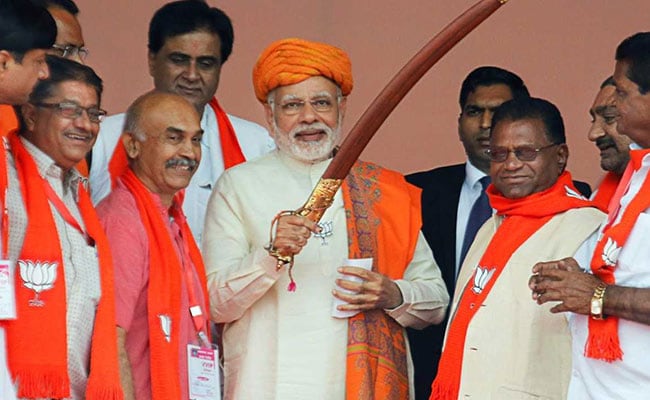 Ahead of his massive victory in the 2014 national election, Mr Modi was derided by Mani Shankar Aiyar as a tea seller who could never be Prime Minister. "Narendra Modi will never become the Prime Minister of the country... But if he wants to distribute tea here, we will find a place for him," Mr Aiyar had infamously said.

That comment was seen to have contributed significantly to Mr Modi's sweep of the general election. In his campaign, he had offered his credentials as a self-made leader, stressing the fact that he sold tea on trains as a young boy to help support his family and contrasting his modest origins with those of the Congress' Gandhi family, which controls all power in the party.

PM Modi has pitched the Gujarat election as a battle between development and dynasty in his attacks on Rahul Gandhi, who has been elected unopposed to take over as Congress chief from his mother Sonia Gandhi.

Amid widespread condemnation he said, apologising for he called his poor command of Hindi, "I meant low level when I said 'neech', I don't think he is low born...if it has some other meaning then I apologise."

Promoted
Listen to the latest songs, only on JioSaavn.com
The BJP is accepting no clarifications. "It is not just a matter of filthy language but of the Congress' mindset which says that only one family can rule this country and if someone from the weaker section becomes PM then they call him 'chaiwala' and 'neech'," Arun Jaitley said.