"For Life And Lung": Gurugram Residents March To Save Aravalli Forests

People of all ages gathered at Khushbu Chowk with placards and banners before taking out a two-kilometre march against the planned legislative move.

Over a hundred people gathered at Khushbu Chowk to protest the controversial amendment.

Nearly a hundred residents of Gurugram took out a protest march on Sunday to push for safeguarding the Aravalli range, a vital ecological zone and biodiversity hotspot that's home to nearly 400 species of plants and 200 species of native and migratory birds. As many as 60,000 acres of the protected forested area is likely to become available for construction purposes soon, with the Haryana government all set to table an amendment to this effect in the ongoing assembly session.

People of all ages, from teenagers to senior citizens, gathered at Khushbu Chowk with placards and banners before taking out a two-kilometre march against the planned legislative move. "If they want real estate development, there are lots of other places for it. You have to know which areas to protect and which places to build structures. We are not saying no to development, but it should not come at the cost of destroying the Aravallis. It will lead to the destruction of both air and water quality in the area," Vineeta Singh, one of the protesters, said.

A study of the Aravalli hills in southern Haryana by the Wildlife Institute of India a few years ago identified it as India's most "degraded" forest range. The study, conducted between January and April 2016, found that "most of its indigenous plant species have disappeared... and the most serious threat to wildlife and forests is development activities, which are gradually destroying its remnants". 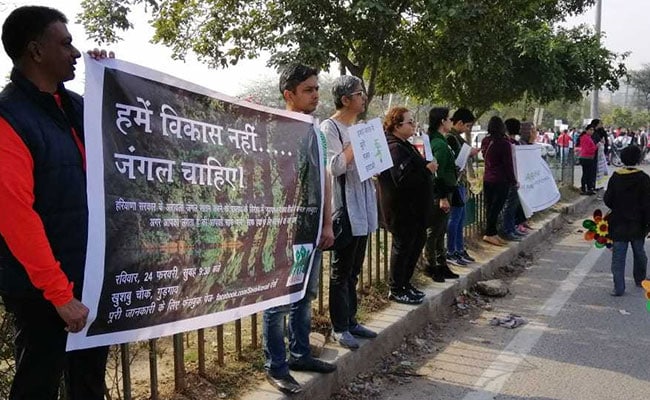 The protesters said that development should not come at the cost of the country's precious resources.

However, the Haryana government is now likely to bring an amendment to the Punjab Land Preservation Act-1900, which protects large portions of the Aravalli foothills. Once passed, it will be possible for realtors to take up construction activities on 60,000 acres of the forest land - affecting large areas of Gurugram and Faridabad. The forest cover in Haryana comes up to just 3.59%, the lowest in the country.

Participants of the march also highlighted the effect such an action would have on people's health. "Pollution levels are already high, even with the Aravallis intact. Things will get much worse if it is destroyed. People tell me not to live in Gurugram, but that can't be the solution. What we need is a sustainable development approach," said Sameexa Sud, a Class 12 student.

Fitness enthusiasts in Gurugram stand to lose an irreplaceable venue for trail runs and bicycling events if the Manohar Lal Khattar government goes ahead with the amendment. "I come here twice a week with my friends to cover a distance of 30-40 km on bicycle. This attempt to allot 60,000 acres for construction purposes poses a big threat to the very concept of healthy living. There will be no space to jog and cycle, and pollutants in the air will only multiply," said Ali Masudi, another resident, adding that 90% of the people cannot afford PM2.5 masks.

The protesters claimed that they met Haryana Forest Minister Rao Narbir Singh, who assured them that their objections will be taken into account.