For gay men outed on TV, an identity crisis 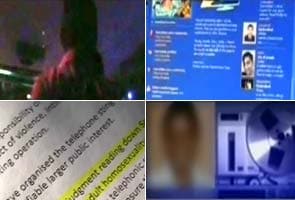 Many families in Hyderabad are trying to piece their lives back together after a local TV channel, TV9, carried a story that outed young homosexual men.

One man attempted suicide. Others have called in sick to work while they figure out how to adjust to a world that now knows intimate details that they were not ready to share.

The channel featured a reporter phoning gay men whose photos and phone numbers were identified on a social networking site. The men were recorded without their permission, and the conversations were broadcast along with their profile photos.

The channel presented the story as an investigative piece into the underground gay culture in the city. The poverty of ethics was mixed with a homophobia that was reflected in statements that described the sexual activities of gay men as "against the law of nature."

"Three people have gone underground. They don't want to show their faces to their parents now. They don't know. It is a shock for them," says Krishna, an openly gay young man who works with a community based organization.

Sethumadhavan, who is 32-years-old, is familiar with the heartache that often accompanies alternative lifestyles and choices. At the bank where he worked his colleagues found out about him and started harassing him at workplace.

"Colleagues ridiculed by calling me names - there was sexual harassment, low self-esteem, guilt and I even attempted suicide because of that," he said.

He now runs a catering service because the government of Tamil Nadu has been very supportive of the community. He lives in Coimbatore.

Promoted
Listen to the latest songs, only on JioSaavn.com
Gay rights groups across the country are planning to hold demonstrations to demand action against TV9, but also to call attention to the insensitivity in media and society towards homosexuality.

Some people have argued that because the information about the men who were outed on TV was available on a website, it was in the public domain. However, gay rights activists point out that sites like the one covered in the TV story offer a chance for friendship and peer support groups  -much needed when there is little assistance or acceptance elsewhere.