Films with suspense do well: Karunanidhi won't commit to support for FDI 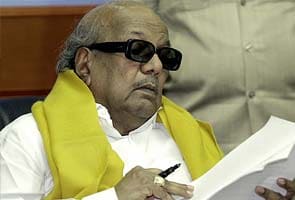 New Delhi: The government's main ally, the DMK, has refused to commit to whether it will back the Prime Minister when the politically-contentious reforms in retail are put to a vote in Parliament.

"Let the DMK's stand remain a suspense. Only a movie with suspense does well," said the party chief M Karunanidhi today, adding that it will continue to protect the interests of traders and small vendors,  a powerful vote bank in Tamil Nadu that  says  Foreign Direct Investment or FDI in retail is a sell-out by the government.

The Winter Session of Parliament begins on November 22.  Prime Minister Manmohan Singh's government is in a minority after Mamata Banerjee and her party's 19 Lok Sabha MPs dropped out in September after the government raised the prices of diesel, limited the supply of subsidised cooking gas to families, and allowed FDI.

The Left has said it will ask for a debate followed by a vote on FDI in multi-brand retail, which green-lights the arrival in India of foreign mega-chains like Wal-Mart.

The BJP, sensing a chance to foment some damage, has said it will talk to all parties opposed to FDI to see if a united front can be assembled against the government, forcing it to take a vote.

"We will totally oppose FDI in the upcoming Parliament session. The strategy for Opposition will also be coordinated within the NDA and also with other parties opposed to FDI," BJP leader Ravi Shankar Prasad said today.

The 18 MPs of the DMK make the Southern party the biggest member of the Congress-led UPA. In the past, its leader, Mr Karunanidhi has said the party does not back FDI in retail, partly because small traders form a huge votebank in its home turf of Tamil Nadu. The DMK supported a country-wide protest against the new reforms which was called by trade unions and supported by a range of political parties like the BJP and the Left.

Sources say that DMK leader T R Baalu is likely to meet the Prime Minister soon to discuss how to avoid voting against the government without undermining its own stand. Sources say the party is considering a possible "walk-out" if a vote on FDI does take place - this will allow DMK MPs to avoid taking any stand at all by boycotting the vote.

The government is unlikely to trip in Parliament. Last week, the Prime Minister met the two powerhouses from Uttar Pradesh who are crucial to his government's survival - he lunched with Mayawati and dined with Mulayam Singh Yadav, fierce rivals who provide external support to the UPA with 43 MPs between them.

Mayawati said recently at a rally that though she has not been in favour of FDI in retail, she is open to being persuaded of its merits.

Though Mr Yadav has also opposed the reforms in retail, he has said he will steer clear of any move that will allow "the communal forces" of the opposition BJP to benefit - a tacit signal that his Samajwadi Party may not consider voting against the government on FDI.