A survivor said, initially it felt like an earthquake has struck. Cab driver, Satish Kshetre said he used ropes made of sarees and rescued 10 people. 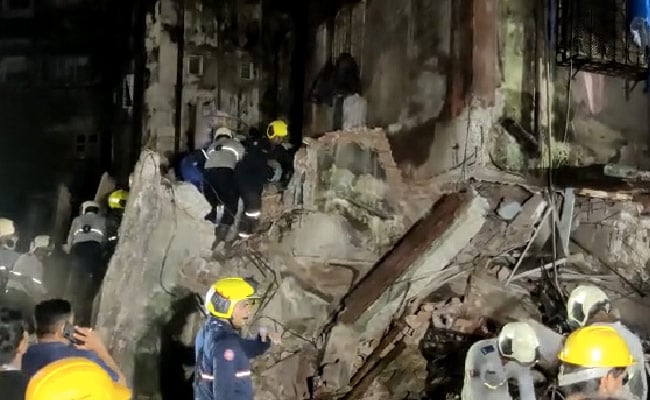 A survivor said most of the residents of the building were tenants.

Cab driver Satish Kshetre was relaxing with his guests in his room in a Naik Nagar Society building in suburban Kurla when he suddenly felt like an earthquake has struck and as soon as he realised that the neighbouring wing of his building has crumbled, the first thought that came to his mind was to rescue his family members and guests.

As the common staircase of the east and west sides of the affected D wing also collapsed, Mr Kshetre, a resident of the third floor of the west side, prepared a rope using sarees and rescued all the ten people, including his family members and some guests visiting him, with the help of local people.

At least 14 people were killed and 13 others injured after the four-storey building collapsed around Monday midnight, civic officials said on Tuesday.

All four floors located on the east portion of the D building in the Naik Nagar Coop Housing Society were sandwiched in the crash. On the west side, the ground and the first floors were affected while the remaining three floors remained intact. "For a moment I thought we will not survive but by the grace of God, we are alive," Mr Kshetre told PTI.

Recalling the horror of the night, he said it was like an earthquake.

"The entire building (D wing) shook and immediately, the adjoining east portion collapsed with a loud, deafening noise," he said.

Mr Kshetre said at least 10 people, including his family members and five guests, were present inside his room at the time of the incident which happened around 11.40 pm on Monday. Some of them were already in bed while others were awake, he said.

"For a moment, I became numb. But after a few moments, I gathered some courage to save myself and my family members," he added.

Satish Kshetre said the common staircase of the D building had collapsed.

"I made a rope using sarees and safely rescued all the ten people inside my room with the help of local people," he said, adding that people stuck on the fourth floor were also rescued similarly.

The 27-year-old who drives an app-based cab said he was supposed to shift to another rented accommodation on Tuesday due to the dilapidated condition of the Naik Nagar Society building.

He said most of the residents of the society are tenants but some rooms are unoccupied.

Mr Kshetre said a family of three had come to stay in the affected building just two days ago, but they were trapped under the ruble.

Devraj Badiya, a resident of Kurla, was eagerly awaiting the news about the whereabouts of his younger brother Ramesh while waiting on the road outside the affected building.

However, the anxious wait turned into despair as Ramesh was pulled out of the debris dead.

Devraj said Ramesh had shifted to the affected building just two days back as the building where we were staying was in a bad shape.

"My brother shifted to the dilapidated building due to urgency for home," he added sobbing.

Earlier in the day, the Badiya family was requesting rescuers to trace Ramesh under the crashed staircase. Ramesh's son had told them that the former was trapped under the staircase.

Three members of the Badiya family had shifted to Naik Nagar Society just a few days back.

Devraj said one member of the family died while two others were rescued earlier in the day.

Rahul Ramteke, a class 12 student residing in a neighbouring slum, watched in horror as the four-storey building came down crashing with loud noise and the water tank on its terrace fell on the road, crashing into the compound wall.

"Some people from the third floor of the building were shouting for help when the building was coming down," recalled Ramteke who was checking his mobile phone at the time of the incident.

Ashok Rajguru, a conductor in BEST undertaking, told PTI that he was in bed when he heard a loud noise.

"When he rushed out, he saw a thick cloud of dust emerging around the crashed building," he said, adding there was chaos as the power supply to the building was disconnected.

"Three of our dogs are also on the site helping to locate survivors," Mr Kumar said, adding that rains slowed down operations.

"Our teams had rescued three persons alive from the debris until 10.30 AM," he said.