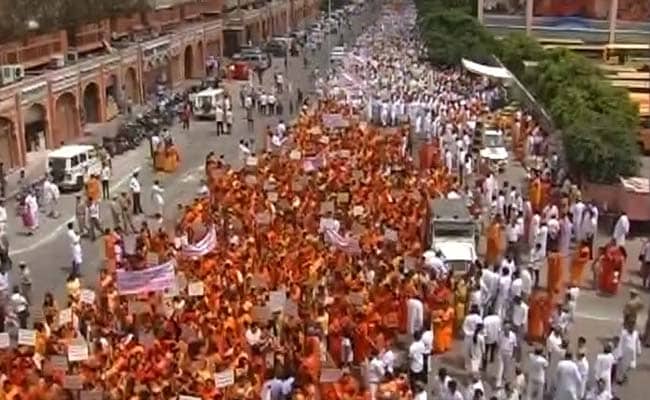 The Rajasthan High Court had equated the Jain ritual of 'Santhara' with suicide.

New Delhi: A tradition of Jains starving themselves to death is an essential part of religious freedom, a petition in the Supreme Court has said today, as thousands of Jains are protesting the ancient ritual of "Santhara" being declared illegal.

Last month, the Rajasthan High Court said that the voluntary custom of santhara is a form of suicide and therefore illegal. Yesterday, thousands of Jains held a demonstration in Jaipur carrying banners that read "Suicide is crime. Santhara is religion."

The High Court's order has already been challenged in the top court. But today's petition, filed by an association of Jains, argues that "Santhara is an integral part of the Jain religion and the court can't interfere with its customs".

As part of their religion, Jains can take a vow to give up food and water as a way of embracing death. It is unclear how many deaths occur every year but local media put the number at a couple of hundred.

The High Court verdict was based on a petition by an activist in Rajasthan who argued the practice was against the law. He questioned whether elderly Jains were being encouraged to take the vow to free families of the burden of taking care of them, an argument Jains deny.