"Nobody Will Be Stopped": Haryana Police After Delhi Lets Farmers In

After three days, the Haryana Police has removed barricades placed on highways in Ambala and Kurukshetra to stop farmers' "Delhi Chalo" march. Decision was taken after farmers were allowed to enter Delhi for a planned protest against new farm laws. 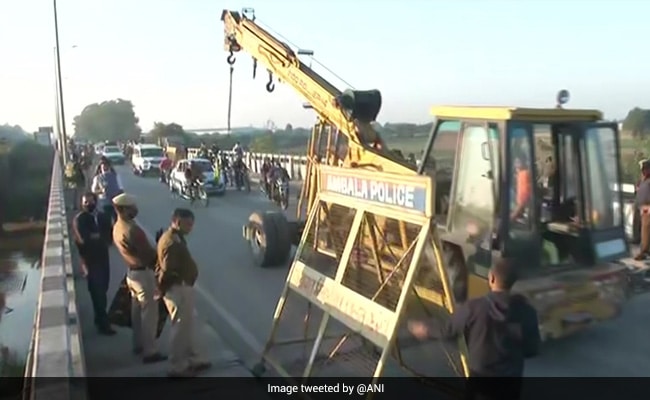 The Haryana Police has removed barricades from near the state's border with Punjab in Ambala and Kurukshetra districts after the Delhi Police allowed farmers to be escorted to a large ground near the capital's outskirts where they have been permitted to protest peacefully.

"Nobody will be stopped, commuters can travel with ease," senior Ambala police officer Rajesh Kalia said.

The police removed barricades near Ambala's Shambhu border - the site of fiercest action by Haryana Police since Friday morning with tear gas shells and water cannons. However, farmers marched on unfazed.

Water cannons, tear gas being fired at Shambhu border and Sonipat border. The fiercest attack by Police since morning, but farmers unfazed.

All this, after farmers allowed to enter Delhi for protest, escorted by police. NDTV's Arun Singh and Saurabh Shukla report. pic.twitter.com/vIUvZIM3nd

The BJP-led Haryana government was widely criticised for continuing to block roads and use force against farmers, chiefly from Punjab, marching to the national capital as part of the "Delhi Chalo" protest even as Delhi Police and leaders of farmers organisations initiated talks.

"Centre has now allowed farmers to enter Delhi, yet the ML Khattar government is resorting to brutal force to stop them from marching peacefully to the national capital? What's the need for such harsh measures? This barbarism needs to stop right now," Punjab chief minister Amarinder Singh wrote.

The BJP-led central government blinked as thousands of farmers from six states showed no signs of slowing down or giving up despite being stopped in Haryana, UP-Rajasthan border and then again in Delhi.

Earlier in the day, leaders of country's leading farmers' unions had also written to Prime Minister Narendra Modi demanding negotiations and calling upon him to let farmers reach Delhi and make their voices heard.

The letter came in the backdrop of severe police action in Haryana and Uttar Pradesh - the two entry states for the national capital, where farmers said they can camp for months if their demands for legally assured minimum support price, and scrapping the recently enacted farm laws are not met.

Ahead of the farmers' planned march, the Haryana Police had issued extensive travel advisory highlighting blockades across state and national highways leading to Delhi.

When farmers did not heed, the resulting stand-off with the police caused massive jams across Delhi and Haryana.