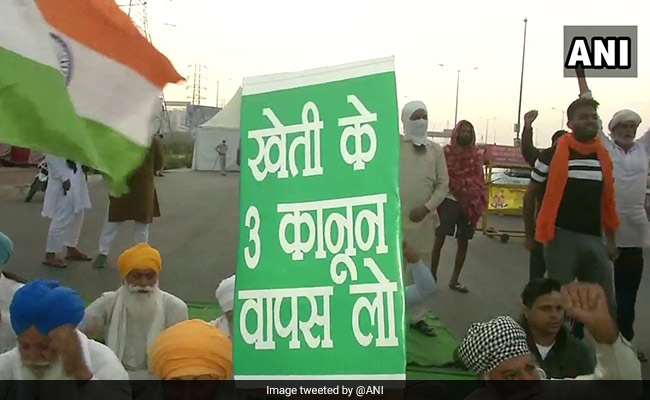 The protest against three controversial farm laws, which began last year, will continue, a farmers' body said today to mark the 200th day of their agitation.

Thousands of farmers, mostly from Punjab, Haryana, and western Uttar Pradesh, began their protest in November at three different border points of Delhi, demanding that the Centre repeal these laws. The demonstrations at Singhu, Tikri, and Ghazipur borders also received support from social activists, some political parties as well as locals.

This  morning, Kisan Ekta Morcha, a farmers' collective, tweeted that the “biggest protest in Indian history continues as it completes 200 days”.

"Farmers are all set for an intensified protest” till their demands are met, the farmers' body said.

Farmers' protest; biggest protest in the Indian History continues as it completes 200 days of immense fight
Conquering ovr all the hurdles-insult/torture/harassement etc. Of Modi Govt. Farmers are all set for an intensified protest until the WIN#200DaysOfFarmersProtest

#200DaysOfFarmersProtest
200 days done & many more to come...
Farmers are all set for a prolonged protest until 3 Black Farm Laws Repealed#FarmersProtest continues...

Over the past six months, the protesters weathered Delhi's biting cold before the devastating second wave of the novel coronavirus. The farmers, however, continued their resistance.

Last week, on June 11, the protesting farmer unions announced that they will organise sit-ins at governor houses across the country on June 26. The day will also mark the completion of seven months of the farmers-led agitation against the news agricultural-marketing laws.

On June 26, the Samyukta Kisan Morcha, an umbrella body of over 40 farmer unions, said they will show black flags and send memorandums to President Ram Nath Kovind.

Farmer leader Inderjit Singh of Samyukta Kisan Morcha told a press conference that the day will be observed as "Kheti Bachao, Loktantra Bachao Diwas (save farming, save democracy day)".

“We will protest by showing black flags at Raj Bhavans and giving memorandum to the President through the governor of each state, who is the President's representative. It (June 26) is also the day when Emergency was declared in 1975 and we will complete seven months of our protest. Along with farming, the democratic rights of the people have also been attacked in this environment of dictatorship. This is an undeclared emergency," Mr. Singh said.

On April 9, the Supreme Court of India said the roads shouldn't be blocked, come what may, while hearing a petition against the ongoing farmer protest at the Delhi borders.

“We are not going into the larger issue but are referring to a limited issue. The larger issue can be solved judiciously, administratively, and politically. We have been repeatedly saying that public roads should not be blocked,” said the court.

The court was commenting on public interest litigation filed by a Noida resident Monica Agarwal who claimed that "andolans (agitations) destroy the economy and result in violence and blocked roads". Her petition demanded an assurance that the road between Noida and Delhi will be kept clear so that passenger traffic is not affected.