In a related development, a three-member Special Investigation Team (SIT), formed in connection with the killing of the student, Nikita, began its probe on Wednesday and met the victim's family members in Faridabad's Ballabhgarh. 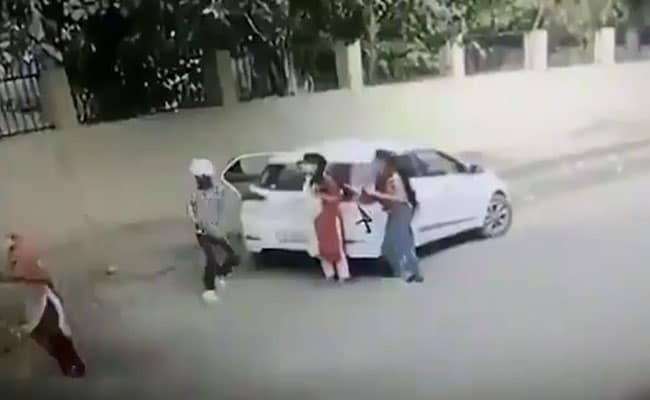 Faridabad Murder Case: The woman's shooting outside the college has been caught in a video. (File)

Haryana's Home Minister Anil Vij claimed on Wednesday that the main accused in the murder case of a college student in Ballabhgarh was related to some Congress leaders in the state and it was due to pressure from them that the victim's family had withdrawn an earlier complaint against the man.

In a related development, a three-member Special Investigation Team (SIT), formed in connection with the killing of the student, Nikita (21), began its probe on Wednesday and met the victim's family members in Faridabad's Ballabhgarh.

The SIT, headed by Assistant Commissioner of Police (Crime) Anil Kumar, visited the victim's home on the Sohna road in Ballabhgarh and interacted with her parents for a few minutes, the father of the woman told reporters.

Police have arrested two men -- Tausif, the main accused, and Rehan -- for allegedly killing the victim outside her college in Ballabhgarh, an incident that triggered protests with students and locals blocking the road to Sohna on Tuesday.

Mr Vij told reporters in Ambala that the SIT will also probe the sequence of events leading up to the killing since 2018.

"The main accused behind the killing of a 21-year-old college student in Ballabhgarh is related to some Congress leaders from Haryana and it was under their pressure that the victim's family had withdrawn an earlier complaint lodged against the man in 2018.

"The SIT will probe the events from 2018. It will be probed under what circumstances the girl's parents were forced to give an affidavit to take their complaint back then," he said.

The minister added that it will also be probed why "pressure was being built on Nikita to convert, despite her outright refusal".

Commenting on the manner in which the accused shot the victim dead in broad daylight outside her college, he said, "I will not allow this kind of ''dadagiri'' in the state. The accused will be punished in accordance with law."

The victim, a B.Com final-year student, had come out of her college after appearing in an exam on Monday afternoon when the incident took place.

Her mother told reporters at her residence on Wednesday that the main accused had harassed her daughters two years ago and pressured her to convert to Islam in order to marry him, which she had refused to do.

The victim's family had lodged a police complaint against the main accused two years ago for allegedly harassing her.

However, the complaint was withdrawn as the accused's relatives had assured the victim's family members that Tausif would mend his ways and not harass the woman.

"After that, there was no contact between us and the accused or his family. Nikita had been attending her college regularly. She was a bright student, scoring high marks in her college. She had scored very high marks in her Class 10 and Class 12 examinations...losing her in this manner has left us shocked," her mother said, struggling to control her tears.

The victim's family has demanded capital punishment for the main accused.

"I have assured them that whatever support they may need from us, we are ready to extend all help," she said.