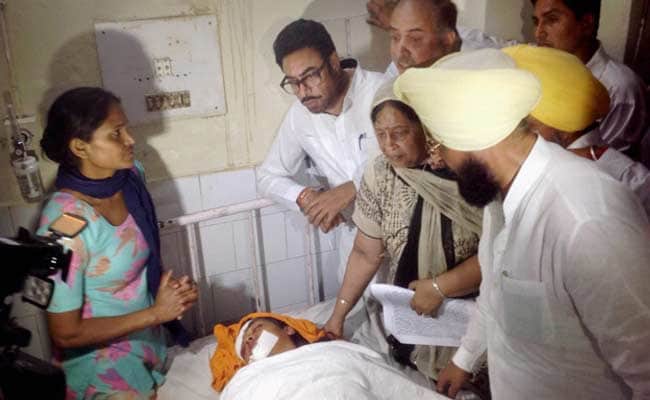 Moga, Punjab: On Thursday, as her family protested against the death of a 14-year-old girl who was thrown off a moving bus after a group of men molested her, her father was found missing from outside the hospital where her mother is being treated for severe injuries.

He returned many hours later to allege that he had been taken away by policemen who had made him sign some papers. "He asked me to agree on a settlement. I don't know what was written, but I put my thumbprint on the document," said the girl's father.

The family alleges that he is being pressured to reach a compromise with those accused of molesting and murdering the teen.

Four men - the driver, conductor and cleaner of the bus, and an associate - have been arrested.

The private bus was run by Orbit Aviation, in which the family of Punjab Chief Minister Parkash Singh Badal has stake, and questions are being asked on whether the police have been slow to act.

The opposition Congress points out that it took the police 15 hours to make arrests. The Congress says it does not trust local authorities to conduct a fair investigation because of the Badal connection, and has demanded a judicial inquiry.

The bus in which the teen and her mother were attacked had tinted windows and curtains, which flouts the law.

On Wednesday evening, the girl, her younger brother and mother boarded the bus to go to a local gurudwara. Inside, they were allegedly abused and groped by a group of men, including the bus crew. Other passengers watched but no one helped.

Promoted
Listen to the latest songs, only on JioSaavn.com
When they protested, the girl and her mother were thrown out from the moving bus. The girl hit her head on the road and died. The 38-year-old mother is in hospital.

The girl's 10-year-old brother was dropped further away, from where he walked till he found his mother and sister lying on the road.
Comments
MogaGirl thrown off busParkash Singh BadalHarsimrat KaurPunjab teen diesTeen molestedGirl molestedPunjab girl molested