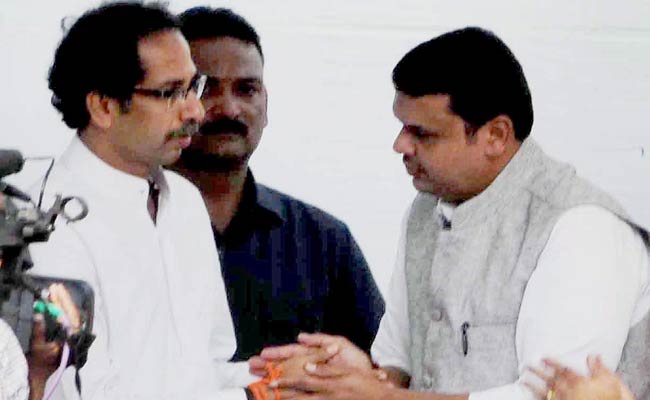 Mumbai: The dramatic events of Monday that led up to the launch of Pakistan Foreign Minister Khurshid Mahmud Kasuri's book in Mumbai, brought the tenuous ties between partners BJP and Shiv Sena in Maharashtra to a new low. The Shiv Sena has dismantled the alliance for important civic elections, expected to be held on November 1.

The Sena will contest all 122 seats of the Kalyan-Dombivali municipal elections on its own. Kalyan and Dombivali are Mumbai's satellite cities with a municipal corporation currently run by the Sena-BJP alliance.

Last night, Maharashtra Chief Minister Devendra Fadnavis had accused the Shiv Sena of bringing the state a bad name with its protest against the launch of Mr Kasuri's book, which included an attack with black paint on the event's organiser, former BJP adviser and columnist Sudheendra Kulkarni.

"We cannot endorse Mr Kasuri, but can't let our state turn into a banana republic," said the chief minister, who made unprecedented security arrangements for Mr Kasuri.

"We may not agree with views of somebody, but when a foreign dignitary or a diplomat arrives on a valid visa and holds a program which is not illegal, its the duty of a state to provide protection," Mr Fadnavis said.

The Sena says it will oppose any engagement with Pakistan as long as it supports terror attacks on Indian soil.

Last week, it forced the cancellation of famous Pakistani singer Ghulam Ali's concert in Mumbai, another episode that pitted it against Mr Fadnavis, who had said the ghazal singer was welcome to perform in the city.

Despite the chief minister's promise to provide Ghulam Ali with "full protection," organisers of the concert called off the performance after meeting Sena chief Uddhav Thackeray. It underscored not just the disconnect between the two ruling allies, but also how things function on-round in Mumbai despite the BJP now leading the alliance in the state.

Mr Kasuri made it to his book launch without incident or even encountering protests on Monday evening. Six Shiv Sena workers were arrested for the paint attack on Mr Kulkarni, described by Sena leader Aditya Thackeray as "non-violent".

They have now been released on bail.