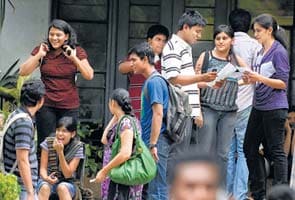 New Delhi: At one of the better colleges in India's capital, there is just one large room for 140 faculty members to sit and have a cup of tea or grade papers. "If even half show up, there aren't enough chairs," said Ghazala Amin, a history professor there. "There is no other place to work. In this situation, how do you expect teachers to work?"

The lack of amenities for faculty members is not the only issue. After 30 years at Jesus and Mary College, which is one of dozens administered by the University of Delhi, Ms. Amin makes the equivalent of $22,000 a year - less than half of what some of her better students will make in their first jobs. New opportunities offer not just more money for graduates but also mobility and flexibility, which are virtually unheard of for faculty at most of India's colleges and universities.

All this means that India is facing a severe shortage of faculty members. But it is not just low pay and lack of facilities that are being blamed. According to a government report published last year, a massive expansion in higher education combined with a poor supply of PhD's, delays in recruitment and the lack of incentives to attract and nurture talent has led to a situation in which 40 percent of existing faculty positions remain vacant. The report's authors, mostly academics, found that if the shortfall is calculated using the class size recommended by the government, this figure jumps to 54 percent.

Experts say this is the clearest sign that India will fail to meet the goal set by the education minister, Kapil Sibal, who has pledged to more than double the size of the country's higher education system by 2020. They say that while the ambition is laudable, the absence of a long-term strategy to develop faculty will ensure that India's education dream remains just that.

"This is a factor that we didn't really study very carefully," said Chiranjib Sen, one of the authors of the report and a professor at Azim Premji University in Bangalore. "It's obvious that the faculty quality and numbers is a very crucial element in the quality of education."

Mr. Sen says it is "a criminal thing" to increase the number of colleges and universities but not the faculty to run them. "If you can't even manage what you have, how are you going to manage even more?"

This is a problem that has touched even elite organizations, including the Indian Institutes of Technology. The government, which funds them, has decided to increase the number of campuses to 15 from 7. Meanwhile, it has had to significantly increase the number of students to meet quotas for certain disadvantaged groups that were announced in 2008. At IIT Delhi, for instance, the size of the student body has jumped from 4,800 to almost 7,000, almost entirely because of this policy. Where there should be 700 faculty members, or one for every 10 students, there are only 450, said M. Balakrishnan, the deputy director in charge of faculty.

He says the problem is not one of insufficient resources. Instead, there is a "huge misunderstanding" about how quickly his organization can grow and attract faculty. "The research institution cannot grow very quickly," he said. "It takes time. We need to provide housing and research facilities for them to want to be here."

Whatever the reason, the fact that there is a faculty shortage "has an enormous impact on research," said Krishna Jain, a retired physics professor from IIT Delhi. "You spend so many hours teaching, so how can you do research?"

And, Mr. Jain said, it is now more difficult to attract good students to support faculty in research programs for one simple reason: "Salaries cannot compete with the business world. So everyone wants to do an MBA. There's too much emphasis on what you earn."

In India, it was the information technology industry that allowed millions of Indians to earn good salaries. But this skewed the expansion of engineering education, said Mr. Balakrishnan of IIT Delhi, because small private colleges accounted for the bulk of growth. And because these were mainly money-making enterprises, a "large number" of the professors there were not, in his opinion, qualified to teach. "So the faculty shortage may be actually 80-85 percent."

For him, addressing the faculty shortfall problem is one part of the larger question of who should lead the huge expansion of India's higher education system. Mr. Balakrishnan said India could do this only if education was subsidised. To maintain quality, he said, a massive investment by the government was needed, as well as some support from those businesses that wanted to launch institutions in the "philanthropic mode."

Dinesh Mohan, his colleague at IIT Delhi, said only the government could ensure that everyone received a quality education. "There is no example from any country in the world where it has not come from government," he said.

Citing the United States as an example, he said initiatives such as the GI Bill and public funding of even top private universities ensured that no academically excellent student was denied admission. "What you have is a churn - classes mingling," he said. "Innovation comes out of this process. A large proportion of faculty in schools and universities comes from this. They've understood the importance of poor people entering the system for better academic output. Rich people's children do not typically become professors."

Closer to home, Mr. Mohan added, there was an even bigger success story in the making. "You can make the quantum leap," he said, using a phrase used often by India's education minister, "and China has shown that."

He said that while India produced about 700 engineering PhD's last year, about 6,000 earned such degrees in China. Mr. Mohan said China's large state-owned firms had been asked to hire more PhD's, and that the same needed to be done in India. This, he added, would see many more Indians enrolling in such programs, some of whom would enter academia.

Mr. Sen, the professor in Bangalore, said the Chinese had not only increased capacity but quality, too. "They have been doing all kinds of experiments to make sure that their academic institutions maintain standards, at least in the technical field," he said. For example, some universities have two tracks in the same department. "If you publish or have a degree from abroad, you will be put into the top track. And if you don't perform, you'll be dumped."

This is not yet happening in India, according to Mr. Jain. "At a place like Harvard, only one in five appointments gets tenure," he said. "In India, once you make an appointment, after a year you're assessed. There's a probation period of one year, but that's just an eyewash."

This type of quality constraint, coupled with low salaries for academics and the overwhelming rise of private colleges whose fees keep most students out are not good signs, said Ms. Amin, the history professor. She, for one, did not believe that India was on target to increase its gross enrollment ratio - the proportion of eligible students actually enrolled in colleges and universities - to 30 percent, from 12.5 percent to 13 percent, by 2020.

"On the one hand, you want inclusive growth. But on the other, fees will go up" if the expansion of private education continues unabated. "With the kind of situation there is, I don't see that quantum leap happening. I don't see it happening in the next 25 years."

And Kavita Sharma, the former principal of a college that is part of the University of Delhi, also did not expect to see higher education grow at the rate India's leaders talk about. She said that while the contents of the report on faculty shortages were not new, the fact that the government had published it could help to change things. "Now that it's out in the open, out-of-the-box solutions will also start coming. I do see that every day higher education is being written about, talked about, which didn't happen some years ago.My own feeling is, as your universities improve, then the profession will be attractive."

Promoted
Listen to the latest songs, only on JioSaavn.com
Mr. Balakrishnan of IIT Delhi, meanwhile, was more optimistic. He felt India could enroll as much as 25 percent of eligible students in colleges and universities - about twice the current figure - by the end of this decade. "Tangible changes are happening," he said. "The debate that has happened in the last few years has taken people out of their comfort zones. There is more consensus across the board that we need to scale quality education."