Jaipur: Facing criticism after the death of over 500 cows in two weeks at a shelter near Jaipur in Rajasthan, the government has swung into action rushing minister to the shelter in Hingonia.

Chief Minister Vasundhara Raje, in a tweet, assured strict action against responsible officers and said she would visit the shelter soon.

Strict action has been taken against responsible officials for negligence of duty. Shall visit the Hingonia Gaushala myself upon return. 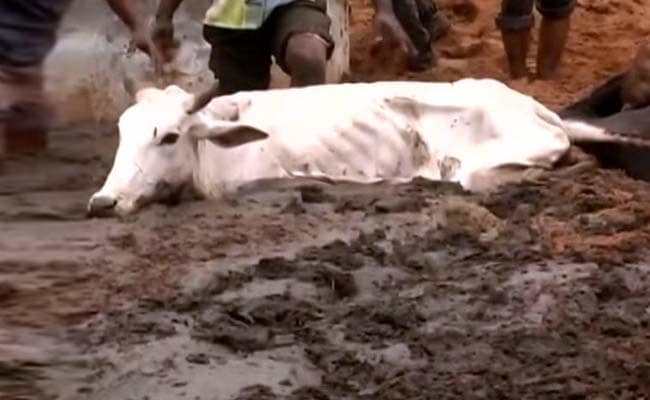 Since more than 250 contractual workers at the Hingonia cow shelter went on strike last month to demand that they be paid, their neglected stalls have turned into death traps.
No one has cleaned the stalls where the animals are kept or fed them, many have starved to death, their hooves stuck in slush caused by heavy rain and cow dung.

"I am a farmer and a cattle rearer, cows who were not eating I have fed them, have given water to the cows, one's who were lying down I have made them sit up," he said.

PM Narendra Modi on Saturday used his first-ever townhall to deliver a lacerating statement on cow vigilantes. Most of these people (self-styled cow protectors) are "anti-social elements hiding behind the mask of Gau Rakshaks", he said.

Meanwhile, attacking the government, the Congress hit the streets with a "gau raksha rally".

"Where are the cow vigilante groups and the gau rakshaks, why don't they go and pull out cows stuck in the mud and slush as our workers are doing," the Congress spokesperson said.

Taking note of the incident, the Rajasthan High Court has directed the Anti-Corruption Bureau to give a report by August 10 on why the salaries of the contract workers were stopped despite the civic body having a budget of Rs 20 crores.
Comments
Hingonia cow shelterRajsthan cow shelterJaipur Municipal Corporation