The former Haryana Chief Minister often visits the Tihar jail library and asks the jail staff to get his favourite books. 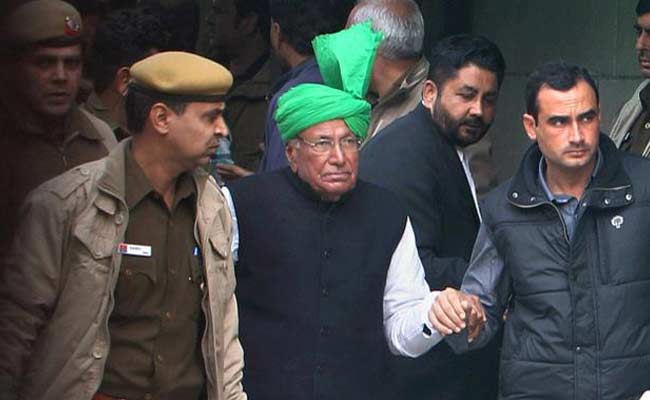 Mr Chautala's big inspiration in jail was apparently neighbor Manu Sharma, who is serving a life term for the 1999 killing of model Jessica Lal and chasing a law degree.

The Haryana politician is serving a 10-year sentence for corruption at Delhi's Tihar Jail, one of Asia's biggest prisons with many high profile prisoners. He was convicted in a teachers' recruitment scam.

For the exam conducted in the prison by a government institute for open learning, Mr Chautala had to return in the middle of his parole in April.

Abhay Chautala said his father is now planning to bag a college degree.

The Indian National Lok Dal president was forced to quit school to take care of his family.

"When he was in school, my grandfather Chaudhary Devi Lal was into politics. My father, the eldest in the family after him, had to educate his siblings, look after the family. Later, he himself entered politics and found little time to pursue his studies," explained Abhay Chautala.

When the last exam was held, Mr Chautala was out on parole but he went back in for it. The former Chief Minister had been let off briefly so he could attend the wedding of his grandson, parliamentarian Dushyant Singh Chautala. His parole ended on May 5.

"He has been in prison for the last four-and-a-half years. My father thought of putting his time to best use and pursue his studies," said Abhay Chautala.

Mr Chautala often visits the Tihar jail library and asks the jail staff to get his favourite books.

Promoted
Listen to the latest songs, only on JioSaavn.com
He thought of studying after learning that Manu Sharma, jailed for the murder of model Jessica Lall in 1999, was studying law.

Abhay Chautala said he hoped his father too would be an inspiration for other prisoners.