General Election 2019: Choice Is Between Dynasty And Development In UP: Amit Shah

General Election 2019: "In Uttar Pradesh, the choice is between dynasty and development. And people will choose development over dynasty," Amit Shah said. 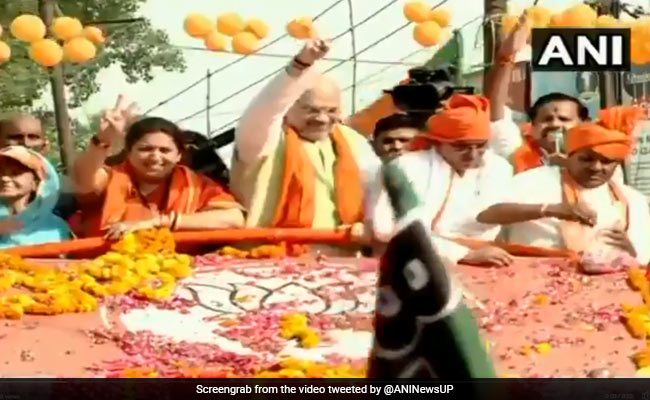 In a last-ditch attempt to wrest Rahul Gandhi's home turf Amethi from the Congress, BJP president Amit Shah held a roadshow here on Saturday and asserted that the people of Uttar Pradesh will choose development over dynasty in this election.

Mr Shah, accompanied by the party's candidate and Union minister Smriti Irani, led the roadshow through major thoroughfares of the town on the last day of campaign as thousands of energetic party workers raised the slogan: "Amethi ki yehi pukar, abki baar Modi sarkar (Amethi's call is for re-election of Modi dispensation).

The roadshow covered a distance of nearly three kilometres in over two hours.

Talking to news agency PTI during the roadshow, Mr Shah said, "In Uttar Pradesh, the choice is between dynasty and development. And people will choose development over dynasty."

He asserted that the BJP would win the Amethi Lok Sabha seat by one lakh votes. "Overall, our seats in Uttar Pradesh will also increase," Mr Shah told PTI.

The BJP had won 71 seats out of 80 in Uttar Pradesh in 2014, besides two seats bagged by its ally Apna Dal.

Ms Irani had lost the election to Congress president Gandhi in 2014, but was able to substantially reduce his victory margin from more than three lakhs in 2009 to just over one lakh in 2014.

Confident of her victory this time, Irani said, "People of Amethi want change. They want development and they will vote for (Prime Minister Narendra) Modi."

The BJP has accused the Congress of failing to carry out development works in Amethi despite the constituency having sent a member of the Nehru-Gandhi family to Parliament for decades.

Rahul Gandhi has been representing Amethi in Parliament since 2004. Before him, it was represented by his mother Sonia Gandhi and father Rajiv Gandhi.

Amethi votes on May 6 in the fifth phase of polling.