Priyanka Gandhi called Prime Minister Narendra Modi a defence expert, adding that he himself decided who will manufacture planes, in a reference to the Rafale fighter jet deal. 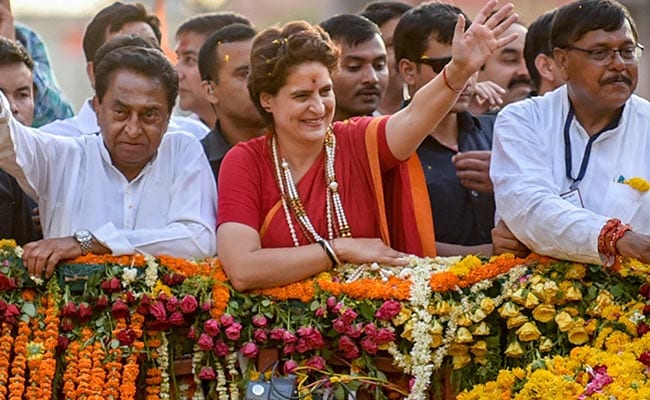 Priyanka Gandhi Vadra on Monday mocked Prime Minister Narendra Modi as a "defence expert" over his comments on Balakot airstrikes where he suggested that clouds could prevent help Pakistani radar from detecting Indian fighter planes during the operation. In her remarks, the Congress general secretary also referenced the Rafale fighter jet deal which her brother and party president Rahul Gandhi has often used to attack the government over allegations of corruption.

Priyanka Gandhi, addressing a rally in Madhya Pradesh's Indore, said: "He is such a defence expert that he himself decided who will manufacture planes. He decided those who have never manufactured a plane in their lives will make it. He gave them land and a contract. He thought the weather is cloudy, (so) he won't come on radar."

#WATCH Priyanka Gandhi Vadra, Congress in Indore, Madhya Pradesh: He is such a defence expert that he himself decided who will manufacture planes, he decided those who have never made a plane in their lives will make it.....He thought, weather is cloudy, it won't come on radar. pic.twitter.com/ZnnoZd5xM8

Congress and opposition parties have accused PM Modi of giving preferential treatment to Anil Ambani's Reliance Defence by awarding it an offset contract of Rs 30,000-crore. The government has also been accused of reworking the UPA-era deal to purchase 36 Rafale fighter jets from France's Dassault Aviation at a much higher price.

The centre, Reliance and the French government have all denied the allegations, but the Congress has promised to probe the case if voted to power in the Lok Sabha election.

On Saturday, in a TV interview to news channel News Nation, PM Modi had said: "The weather suddenly turned bad, there were clouds... heavy rain. There was a doubt about whether we can go in the clouds. During a review (of the Balakot plan), by and large the opinion of experts was - what if we change the date. I had two issues in mind. One was secrecy... second, I said I am not someone who knows the science. I said there is so much cloud and rain. There is a benefit. I have a raw wisdom, the clouds can benefit us too. We can escape the radar. Everyone was confused. Ultimately I said there are clouds... let's proceed."

The Indian Air Force carried out airstrikes in Pakistan's Balakot, targeting a terror camp of Jaish-e Mohammed. The airstrikes took place days after suicide attack in Jammu and Kashmir's Pulwama in which 40 personnel of the Central Reserve Police Force were killed.

The prime minister's comments have been met with criticism and even derision from opposition leaders across parties.

Reacting to the prime minister's comments, Former Jammu and Kashmir Chief Minister Mehbooba Mufti had said: "I was raked over the coals for questioning veracity of Balakot strikes. But seeing Pak media & journos troll PM on cloud gaffe is awfully embarrassing. BJPs ability to suspend logic in its quest to win another term is mind numbingly fatuous. Our armed forces don't deserve this".

A BJP leader played down PM Modi's comments, asserting that there was "nothing wrong" with the PM sharing operational details. "Why should we be so touchy about matters related to national security?... When a question was put to the PM, what is wrong if he gives the details? I don't think there should be any objection to it," BJP leader Vinay Sahasrabuddhe told NDTV.

Case Filed Against 125 For Religious Procession Amid Pandemic In Gujarat