PM Narendra Modi, in an interview, said that he had suggested that clouds and rain could prevent Pakistani radars from detecting Indian fighter jets during the Balakot air strike. 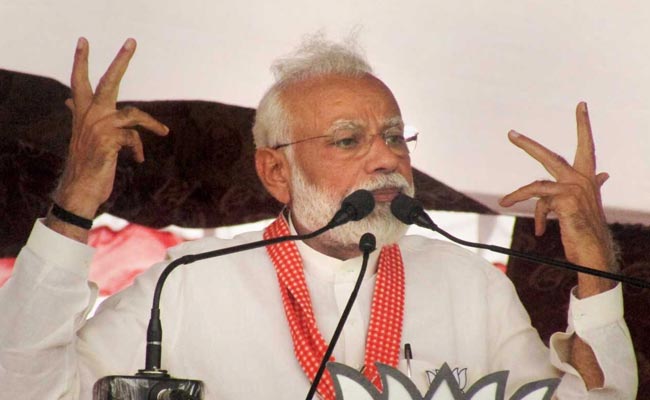 PM's account of the air strikes was tweeted from the BJP's official handle. It has since been removed

Prime Minister Narendra Modi's comment in an interview that he suggested that clouds and rain can prevent Pakistani radars from detecting Indian fighter jets during the Balakot air strike has stirred a huge debate, with reactions ranging from criticism to derision.

In the interview by TV channel News Nation on Saturday, PM Modi said, "The weather suddenly turned bad, there were clouds... heavy rain. There was a doubt about whether we can go in the clouds. During a review (of the Balakot plan), by and large the opinion of experts was - what if we change the date. I had two issues in mind. One was secrecy... second, I said I am not someone who knows the science. I said there is so much cloud and rain. There is a benefit. I have a raw wisdom, the clouds can benefit us too. We can escape the radar. Everyone was confused. Ultimately I said there are clouds... let's proceed."

In the early hours of February 26, Indian Air Force jets crossed over to Pakistani territory to target a Jaish-e-Mohammed terror training facility in Balakot. The operation was carried out days after over 40 soldiers were killed in Pulwama by a suicide bomber of the Jaish.

PM Modi's account of the strikes was tweeted from the ruling BJP's official handle, along with this transcript: "The weather was not good on the day of airstrikes. There was a thought that crept in the minds of the experts that day of strike should be changed. However, I suggested that the clouds can actually help our planes escape the radars."

That tweet is no longer on the BJP timeline, but the party had also tweeted a one-minute video - captioned "The story of the air strike, in PM Modi's words" - which remains.

The original tweet is, however, visible in a flurry of reactions on Twitter. Left leader Sitaram Yechury said: "National security is not something to be trifled with. Such an irresponsible statement from Modi is highly damaging. Somebody like this can't remain India's PM." Mr Yechury has also complained to the Election Commission saying the comments violate the model code of conduct.

National security is not something to be trifled with. Such an irresponsible statement from Modi is highly damaging. Somebody like this can't remain India's PM. https://t.co/wK992b1kuJ

The Congress sneered: "(He) kept spreading jumla (big talk) for five years, thought the weather is cloudy, won't come on the radar".

Looks like the tweet got lost in the clouds. Luckily there are screen shots floating around to help pic.twitter.com/zSW7CsdhKL

Humour aside, the comment has also seeded a debate on experts being overruled on such a critical operation, with some alleging a hasty job for votes. The government, pointed out many, had given the military a free hand in choosing the time and place of retaliation after Pulwama.

The clouds did, in fact, affect the operation as the Indian jets couldn't launch six Crystal Maze missiles that day. These missiles were meant to beam back footage as they struck their targets. Though the Air Force did hit targets using Spice munitions, the video feed of the Crystal Maze strike, meant to showcase the destruction of the terror camp, never materialised because of clouds that day.

Experts say 'reliable' BDA or bomb damage assessment could not be gathered since the missile with the video feed was not launched due to clouds. Air forces around the world use this assessment to see the results of any air strike.

A few wondered whether the Prime Minister meant Lidar, which is laser-based and cannot penetrate clouds because it uses visible light. PM Modi, however, clearly says radar, which can detect objects with precision under adverse weather conditions.