Maneka Gandhi Gets Notice For Telling Muslims "Vote For Me Or Else..."

Election 2019: Union Minister Maneka Gandhi later clarified that her words had been twisted. 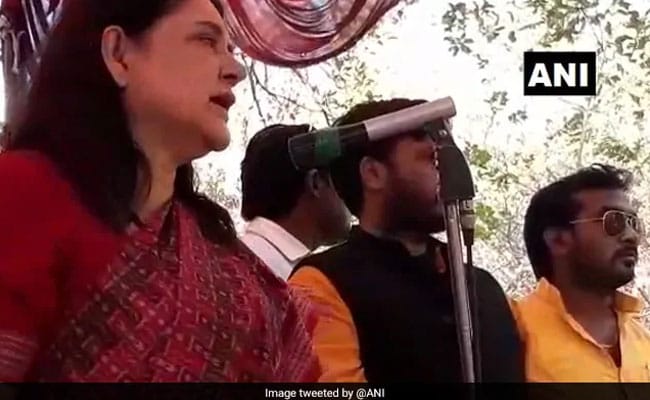 Election 2019: A 3-minute clip of Maneka Gandhi's speech in Sultanpur was shared on social media.

Union Minister Maneka Gandhi was served a show-cause notice by the District Magistrate of Sultanpur, from where she is contesting the national election, and a report has been sent to the Election Commission after she was seen on camera telling a gathering of Muslims to vote for her or else she may not be inclined to be responsive to their requests. "I have already won this election, now it is for you to decide," the BJP leader could be heard saying on Thursday.

"The Election Commission has taken cognisance of the matter. District Magistrate, Sultanpur has issued a show-cause notice to her and a report has been sent to the poll body," BR Tiwari, Additional Chief Election Officer said.

Maneka Gandhi, later on Friday, clarified that her words had been twisted. "I love Muslims and I had myself called a meeting of the BJP's minority cell. I only meant to say that I am winning the elections and their participation would be like 'daal pe chaunka'."

A three-minute clip of her speech in Sultanpur's Turabkhani area is being shared on social media.

"This is important. I am winning. I am winning because of the love and support of people. But if my victory is without Muslims, I won't feel that good. Dil khatta ho jayega (Things will become sour). Then when a Muslim comes to me for work, I think let it be, how does it matter. It's all give and take, isn't it? We aren't all sons of Mahatma Gandhi, are we? (laughter). It's not that we keep on giving and then losing in the election. This victory will happen with or without you."

A little later, she also says, "I have already won the elections, but you will need me. This is your chance to lay the foundation. When the election comes and this booth throws up 100 votes or 50 votes, and then you come to me for work we will see...I don't see any divides, I see only pain, sadness and love. So it is up to you..."

Criticised over the comments, Maneka Gandhi later accused the media of twisting her comments. "I love Muslims... I only meant to say that I am winning the elections and their participation would be like 'daal pe chaunka' (seasoning)."

The Congress termed Ms Gandhi's statement "scandalous". Party leader Randeep Surjewala said should be a strict action and that the minister should be sacked for her remarks and for "dividing people".

Maneka Gandhi, the lawmaker from Pilibhit, began her campaign from the Sultanpur seat about 10 days ago. The seat is currently held by her son Varun Gandhi. But this election, Varun has shifted back to Pilibhit, a seat he won in 2009. Maneka Gandhi has won the Pilibhit seat six times.