Delhi Professor, Jailed In Elgar Case, To Be Shifted To Private Hospital

Hany Babu moved the High Court on Wednesday morning seeking medical aid for an eye infection which he developed after contracting COVID-19. 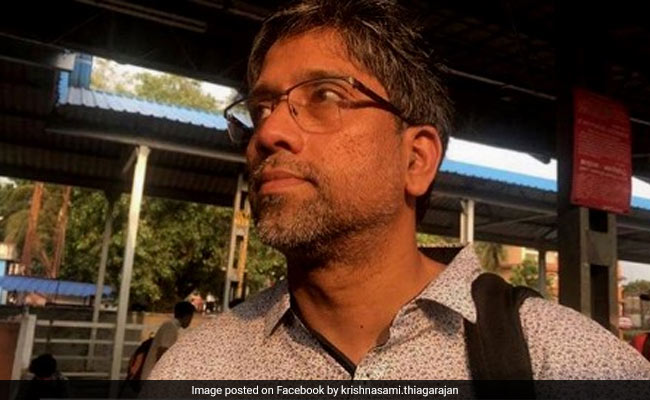 The Bombay High Court on Wednesday permitted Delhi University's Associate Professor Hany Babu, an accused in the Elgar Parishad-Maoist links case, to be shifted to the private Breach Candy Hospital for medical treatment.

Hany Babu moved the High Court on Wednesday morning seeking medical aid for an eye infection which he developed after contracting COVID-19.

The High Court said Mr Babu should be shifted to the Breach Candy Hospital on Thursday under police protection, and charges for his treatment there and medicines prescribed will be borne by
him and his family.

Hany Babu tested positive for coronavirus earlier this month and is currently undergoing treatment at the state-run GT Hospital in Mumbai.

Last week, authorities of the Taloja prison in neighbouring Navi Mumbai brought him to the J J Hospital here, from where he was shifted to the GT Hospital.

His wife Jenny Rowena moved the High Court on Wednesday morning, seeking interim bail and medical aid for him.

Her counsel, senior advocate Yug Chaudhry, approached a vacation bench of Justices S J Kathawalla and S P Tavade, seeking an urgent hearing on the ground that besides testing positive for coronavirus, Mr Babu had also developed a severe eye infection and ran the risk of losing vision in his left eye.

Mr Chaudhry said Mr Babu must be checked to rule out the possibility of black fungus.

Mucormycosis, or black fungus, is a rare but serious infection which has been found in several COVID-19 patients.

The bench, accordingly, summoned the GT Hospital's Dean Dr B G Chikhalkar, who appeared with other doctors via video-conferencing and told the bench that Mr Babu was being provided adequate treatment.

The court then asked for a video call to be arranged between the bench and Hany Babu.

When Mr Babu came on the line, he told the High Court that he was satisfied with the treatment at the GT Hospital.

"My eye is a little better now. I am satisfied," he said.

The hospital authorities told the High Court that they were not equipped to carry out an MRI angio test that had been recommended for Mr Babu's brain by the JJ Hospital.

The High Court said while it won't grant bail to Mr Babu, it could allow him to be shifted to a hospital of his choice.

"Otherwise, this will become a precedent and all prisoners will want to be shifted to private hospitals," Mr Singh said.

The High Court, however, refused to accept the submission.

"Let the family get psychological satisfaction at least that he is being treated at a hospital of their choice, especially if they are footing the bill," the court said.

The High Court said there is nothing wrong in making this a precedent, especially in the current situation.

It was referring to a previous High Court order that had directed the private Nanavati Hospital here to bear the treatment cost of activist Varavara Rao, who is also an accused in the Elgar Parishad-Maoist links case.

The High Court directed the Breach Candy Hospital to submit Mr Babu's medical report in court by June 9, the next date of hearing, or whenever Mr Babu is discharged from the hospital.

As per his family and lawyer, Mr Babu developed an acute eye infection on May 3, and is yet to receive appropriate medical care.

Last week, Mr Babu's wife Jenny Rowena, said in a press conference that his family was struggling to get information from prison authorities and the NIA, which is conducting a probe into the case, on his health condition.

Mr Babu was arrested by the National Investigation Agency (NIA) in July 2020.

The Elgar Parishad case relates to alleged inflammatory speeches made at a conclave held in Pune on December 31, 2017, which police claimed triggered violence the next day near the Koregaon-Bhima war memorial in the district.

The Pune police claimed the conclave was backed by Maoists.

The case was later taken over by the NIA. Several other activists, including Sudha Bharadwaj and Varavara Rao, had been arrested in the case.