Drugs Smuggled From US Seized At Mumbai Airport, 3 Arrested

A Customs official said that the efforts to catch the fourth and the last person involved in the supply chain is underway. 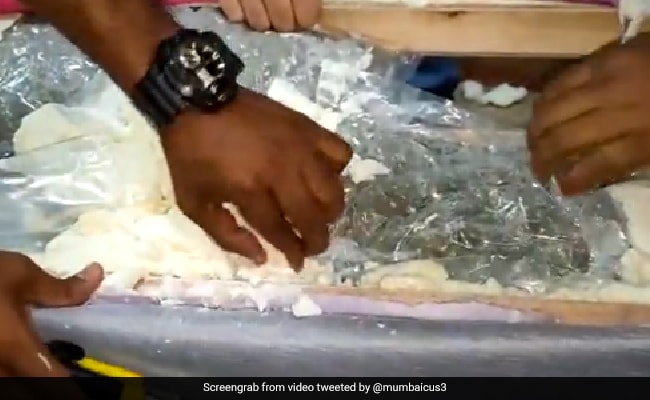 The arrested persons have been identified as being in their late 40s.

The Mumbai Customs, on Friday, busted a drug syndicate smuggling drugs from the United States and operating in Mumbai, and arrested three people involved in the trade of drugs from the Western country.

The arrested persons have been identified as being in their late 40s.

Being alert to prevent the drug menace! Well done @mumbaicus3@cbic_india@FinMinIndiahttps://t.co/05GYGHyy7A

A Customs official said that the efforts to catch the fourth and the last person involved in the supply chain is underway.

"The case is under investigation to nab the last person in the supply chain," the official said.

A senior Customs official informed of the intelligence that said that a courier package originating from America was carrying narcotics drugs. Eyes were kept by the officers of the Airport Special Cargo Commissionerate at the International courier terminal.

"The package was intercepted and 910 grams of Marijuana originating in California was found concealed in an Air Purifier," he said.

Following the interception of the first package, intelligence was developed and also with the help of data analytics, Indian Customs at the International Courier Terminal of CSMI Airport in Mumbai intercepted three more parcels originating from North America from April 22 to 25.

An intensive search of the parcels led to the recovery of high-quality hydroponics marijuana weighing 27.478 kilograms which were hidden in various household items like an outdoor waterfall, fake wood leather chair, and propane gas fire pit table.

The details of these detections and seizures were kept secret and surveillance was mounted by Customs officers disguised as auto-rickshaw drivers and delivery men.

The process of 'controlled delivery' of dummy parcels of identical shapes and looks, so that the actual recipient could not deny his involvement, was also undertaken with the help of the Police.

Sustained surveillance of targeted addresses was carried out by undercover Customs officers in the guise of auto drivers and delivery men so as to execute the operation in a meticulous and flawless manner.

During the dummy delivery, in one of the cases, it was found that the person receiving the parcel was sending it to another address, where the residents would call another person to collect the package. The third person who came to collect the package was found to be the mastermind of the operation. During the course of the search at his residence, another 20 kilograms of marijuana, 120 grams of hashish and some other narcotics substances which are being tested have been found. Three persons have been arrested so far.