Arun Jaitley Takes On Yashwant Sinha As 'Job Applicant At 80'

Arun Jaitley's comment came in response to Yashwant Sinha's biting criticism of the centre's handling of the Indian economy. Mr Jaitley was speaking at the launch of a book by Bibek Debroy and Ashok Malik.

New Delhi: Finance Minister Arun Jaitley, in his caustic rejoinder to BJP veteran Yashwant Sinha's criticism of the state of the economy, obliquely referred to him as "a job applicant at 80". Mr Jaitley also commented that he did not "have the luxury as yet of being a former finance minister" or a "former finance minister who has turned a columnist".

A day after Yashwant Sinha's extensive takedown of the economy and key decisions of the government including demonetisation, Mr Jaitley broke his silence at the launch of the book "India @70 Modi @3.5: Capturing India's transformation Under Narendra Modi" by Bibek Debroy and Ashok Malik.

Without taking names, he quipped: "Probably, a more appropriate title for your book would have been 'India @70, Modi @3.5 and a job applicant @ 80'." 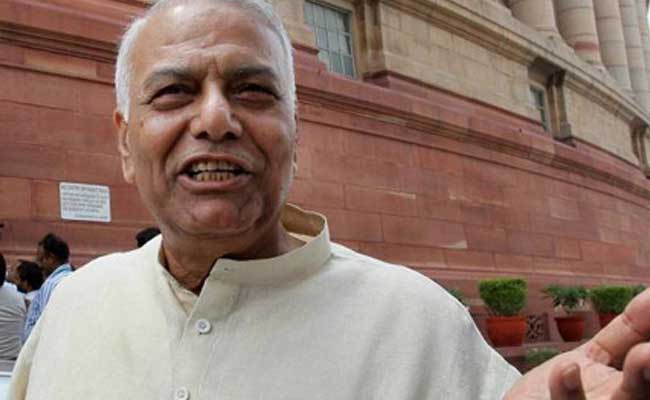 After his takedown of the economy, Yashwant Sinha told NDTV that he doesn't believe Arun Jaitley should resign. (File)

The Finance Minister spared neither Mr Sinha nor Congress's P Chidambaram, who had seized upon the BJP veteran's critique to reinforce his condemnation of the way the government handled the impact of demonetisation and the Goods and Services Tax or GST.

Mr Sinha, 79, in an article for the Indian Express headlined "I need to speak up now", described the economy as a "mess" that will not resuscitate before the next general election. He told NDTV on Thursday that he does not believe Arun Jaitley should resign, but that the need of the hour is for the government to take stock "within the next 15 days" of stalled projects in which crores are tied up, and "decide which ones to cancel and which should move forward."

Defending his policies, the Finance Minister said: "The indifference in dealing with the problem when it was taking place...and then in 2012 to 2014 looking the other way...that is not going to be the approach of this government. He said the leadership of the government was decisive and willing to take steps.

In barbs at both his predecessors, Mr Jaitley said while he had some "very distinguished predecessors" including a former President (Pranab Mukherjee) and a former Prime Minister (Manmohan Singh), a few others had "decided to act in concert".

"Because speaking on persons and then bypassing the issues is something which is very easily done," he said, adding: "...Acting in tandem itself won't change the facts."

The Finance Minister said he had done his own "little research" into what Mr Sinha and Mr Chidambaram had said about each other in the past.

Promoted
Listen to the latest songs, only on JioSaavn.com
Referring to Mr Sinha's comments, he said: "One said of the other: 'Chidambaram will have to be born again to match my record as finance minister'. He then linked Finance Minister Chidambaram to an incompetent doctor for failing to curb India's alarming fiscal deficit. And then went on and said 'I accuse him of running the economy down to the ground."

Then he quoted Mr Chidambaram as saying: "I thought Shri Sinha would be happy to remain a distant memory for the people of India. However, since he seems determined to stay relevant in his party, I am obliged to recall his record during his four years as finance minister. I may point out the 2000-2001 and 2002-2003 were the worst years since liberalisation in terms of growth and Prime Minister Vajpayee had then to force him out and replace him."