"By throwing open the J&K employment avenues, except a part of Class-IV jobs, to the outside states, the BJP-led government has caused the greatest disappointment to the educated unemployed," JKNPP chairman Harsh Dev Singh 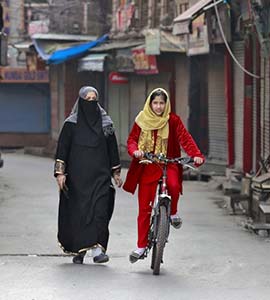 The Jammu and Kashmir National Panthers Party (JKNPP) on Thursday described the newly enacted domicile law as "an obnoxious piece of superimposed legislation" and accused the BJP government at the Centre of having betrayed the trust of the people.

"By throwing open the J&K employment avenues, except a part of Class-IV jobs, to the outside states, the BJP-led government has caused the greatest disappointment to the educated unemployed. They have betrayed the trust of J-K people," JKNPP chairman Harsh Dev Singh told reporters in Jammu.

Mr Singh staged a dharna against the domicile law and demanded its revocation.

Nearly eight months after withdrawal of Jammu and Kashmir's special status, the central government on Wednesday laid down rules for domicile which can now be given to anyone who has resided in the Union Territory for 15 years.

The Centre amended the Jammu and Kashmir Civil Services (Decentralisation and Recruitment) in which a clause for domicile category was introduced under which jobs up to Group-4 in the government were protected.

Under the new law, anyone who has resided for 15 years in Jammu and Kashmir or has studied for seven years and appeared in Class 10 and Class 12 examinations in an educational institution located in the Union Territory is a domicile.

Questioning the changes, Mr Singh said, "If the government had to issue such an obnoxious order, then why did it wait for around eight months? And why did it suspend the entire recruitment process in the new UT for so long?"

"The BJP government has crushed the sentiments of the J-K youth and trampled upon their aspirations...The youth have been belittled and betrayed," he said.