Read inOther Languages
This Article is From Aug 31, 2019

Sources say Dr Upendra Kaul's SMS exchange with one of his patients, Kashmiri separatist Yasin Malik, raised suspicions of investigators. But they may have mistaken the blood report value for "hawala money". 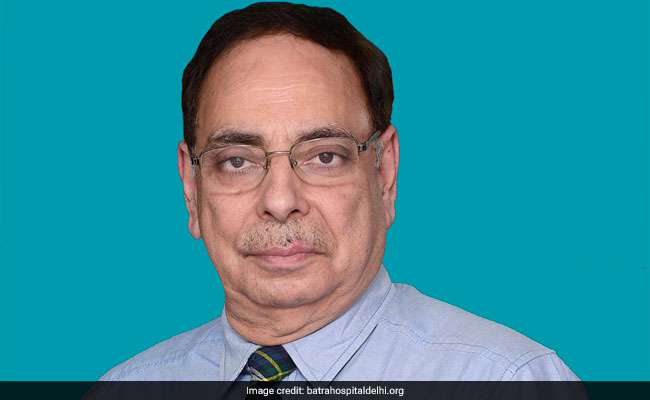 Dr Upendra Kaul has been awarded the Padma Shri, one of India's top civilian awards.

A top cardiologist was summoned by the anti-terror National Investigation Agency (NIA) for alleged links to a Kashmiri separatist after what appears to be confusion over blood test results. Upendra Kaul, an eminent Delhi-based cardiologist and chairman of the Batra Hospital, was questioned for half an hour on Friday.

The summons has been linked by many to his public criticism of the centre's move to end special status to Jammu and Kashmir under Article 370. "I was asked to come in connection with some information I may have, regarding some transfer of money to terrorist organisations. I was questioned quite politely and I answered all the questions very politely," he said.

Dr Kaul's SMS exchange with one of his patients, Kashmiri separatist Yasin Malik, may have drawn the attention of investigators. But they may have mistaken the blood report value for "hawala money", said the doctor.

One of the messages said "Blood Report Value INR 2.78" - INR being Internationalised Normalised Ratio. Sources say NIA may have interpreted INR as Indian rupees, and so, assumed "Rs 2.78 crores in hawala money".

"In one of the messages, he might have send me a report, or something, in which wrote INR 2.78. But that unfortunately was misread as Indian National Rupees 2.78 million or whatever. So when they asked me, I just laughed and I said this is not Indian National Rupee, this is Internationalized Normalised Ratio 2.78 is a normal ratio. And that was basically the end of it. The some here and there talk and that's it," Dr Kaul told NDTV.

The case for which Dr Kaul was summoned dates back to 2017, when the NIA opened a probe into the funding of terrorist groups.

Asked whether he believed he had been summoned because of his opposition to the government's Kashmir move, he said: "I have no idea. Whatever I was asked, I just replied." The situation in Jammu and Kashmir, he said, was "improving slowly".

"Whatever the government does must be for the good of the country. We are with them," Dr Kaul added.

Earlier this month, the Padma Shri awardee was among the voices that questioned the government's stunning Article 370 move, for which massive security restrictions were enforced in Jammu and Kashmir. Thousands of security personnel have been posted across the state and hundreds of politicians were taken into custody. Internet and phone services were also restricted.

"The 1990 (exodus of Kashmiri Pandits) was a very bad moment. But for what was done in 1990, are we now taking revenge on Kashmiri Muslims," Dr Kaul had questioned in an interview to NDTV.