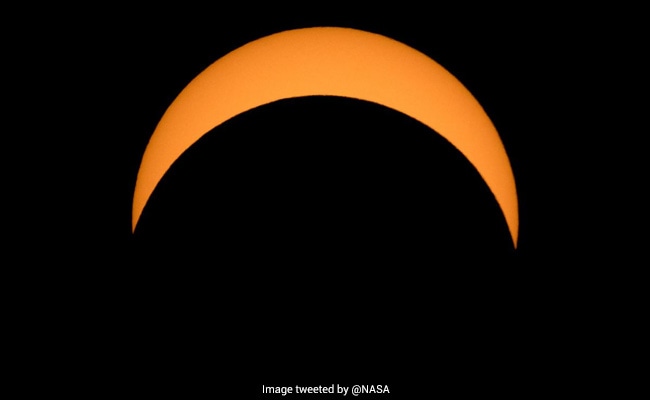 During the Diwali festival on October 25, there will be a partial solar eclipse (Representational)

During the Diwali festival on October 25, there will be a partial solar eclipse which will be visible from the city as well as from most parts of the country, astrophysicist Debi Prasad Duari said.

The eastern metropolis, however, will be able to witness the partial solar eclipse, the second in 2022, for a very small duration, the celestial phenomenon will be better observed in the northern and western regions of the country, he said.

The eclipse will not be observed from north eastern India as the celestial phenomenon will be occurring after the sunset in those regions, Mr Duari said.

Apart from India, the October 25-partial cosmic affair will be visible from most parts of Europe, northern Africa, the Middle East, and parts of Asia, Mr Duari elaborated.

"The partial solar eclipse will begin in Iceland at around 14:29 hours IST and will be seen at its maximum from Russia at 16:30 hours (IST). It will end at around 18:32 hours (IST) over the Arabian Sea," he told Press Trust of India while sharing information on the celestial event.

"During the new moon (Amavasya) the Sun, Moon and Earth almost come in a linear configuration, whereby from earth we can see the moon without any sunlight falling on it. But at times, as on October 25, the Sun, Moon and Earth will almost be on the same plane resulting in the moon appearing to cover the Sun partially for a period of time causing a partial Solar Eclipse," he explained.

In and around the metropolis, the partial eclipse will begin at around 16:52 hours, the maximum occurring at 17:01 hours, and will cease to be seen at 17:03 hours at the sunset, Mr Duari said.

"Even at the maximum eclipse, only 4 per cent of the lighted disc of the setting Sun will be covered by the Moon," he said.

In the north Bengal town of Siliguri, the celestial phenomenon will be occurring between 16:41 and 16:59 hours and during the maximum eclipse (at around 16:56 hours) about 8.91 per cent of the Sun will be covered by the Moon's disc, Mr Duari stated.

"In New Delhi, it will commence at around 16:29 hours and end with the sunset at 18:09 hours with the maximum eclipse to occur at 17:42 hours when the Sun will be obscured by the Moon by an amount of only 24.5 per cent," Mr Duari said.

Jaisalmer in Rajasthan will experience the eclipse from 16:26 hours to 18:09 hours with the maximum at around 17:30 hours. when the disc of the Sun will be obscured by 42.5 per cent.

"In Mumbai, the eclipse will begin at 16:49 hours with the maximum occuring at around 17:42 hours. It will end at 18:09 hours, when the Sun appears to go down the Arabian Sea at sunset. Here, the Sun's disc will be covered by about 24.5 per cent," he added.

The next major solar eclipse to be visible from India will be an annular eclipse on May 21, 2031 when the annularity can be observed from a narrow patch of land in south India, he said.

Three years later, on March 20, 2034, the next total solar eclipse will be visible from India and the totality will be observed from the northernmost part of Kashmir.

On both occasions, the whole country will observe a partial eclipse of varying magnitude depending upon its geographical location, Mr Duari said.

Another partial eclipse can be seen from the northern part of India on June, 1, 2030.

Referring to the harm caused to eyes by Sun's rays during an eclipse, Mr Duari cautioned the sky enthusiasts to take "extreme precaution" while observing it.

"Even if the degree of the partial eclipse is not appreciable in most of the country, extreme precaution has to be taken by everybody who wants to observe this cosmic event. The Sun's rays can be very harmful for the eye and can become critical," he said.