The health ministry had given an ultimatum till 11 am today that those who are not present in their respective department to treat patients will have to face a serious action by the administration. 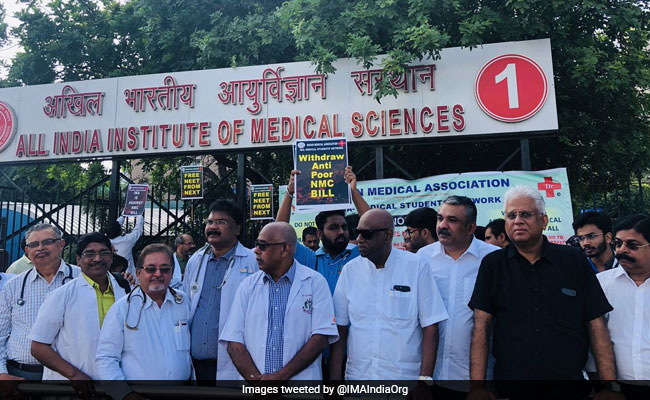 National Medical Commission Bill provides that the common final year MBBS exam be known as NEXT.

The Union Health Ministry has warned the striking doctors that it will take disciplinary action against those who have not joined their medical duties to treat patients.

The health ministry had given an ultimatum till 11 am today that those who are not present in their respective department to treat patients will have to face a serious action by the administration.

On Saturday, doctors from Safdarjung hospital came to the ring road outside the facility while doctors at AIIMS are protesting inside the institute's campus as the administration has deployed security forces to not let the medical practitioners stage a demonstration on the road.

"This is really sad that at Safdarjung hospital, medical services have shut down. Every day, 10,000 patients visit the hospital for health care treatment. This is so difficult for patients. We have given a strict ultimatum to resident doctors to join their duties by 11 am today. Otherwise, we are taking action against them," Dr Sunil Gupta, the hospital's medical director, told ANI.

"I have got strict direction from the health ministry to take action against the striking doctors. There are 2,000 resident doctors at Safdarjung hospital, So we are making a list of all doctors who were present in their respective departments by 11 am today. Those who are not on the department will be terminated and as a punishment, they would be asked to evacuate their hostels," he said.

On late Friday night, emergency services were resumed at AIIMS and all hospitals under the umbrella of Federation of Resident Doctors Association (FORDA). However, the doctors continued their protest for the third day.

The AIIMS administration has deployed heavy security to not allow doctors stage a protest on the road.

"We are sitting at gate no.1 of AIIMS and requesting the President of India to intervene. Emergency services are running. Patients are being treated by resident doctors here," said former Resident Doctor Association President, AIIMS, Dr Vijay Gujjar.

On Friday, the doctors had met Union Health Minister Dr Harsh Vardhan to discuss the various provisions on the NMC Bill. Despite the meeting, the medical practitioners went ahead with the strike.

It provides for the repeal of the Indian Medical Council Act 1956. The Bill provides that the common final year MBBS exam be known as NEXT which would serve as a licentiate exam for entrance to post-graduate medical courses and as a screening test for foreign medical graduates.

Doctors have shown their dissatisfaction over the ambiguity of the Bill. The doctors say they are uncertain on the concept of NEXT and doing away with NEET-PG. There's also a disagreement over the concept of Community Health Providers (CHP) included in the Bill.

The agitating doctors have expressed concern over the privatisation of medical education. "The NMC Bill will give undue favours to the private medical colleges or unaided universities by decreasing the percentage of seats under the controlled fee structure from 85 per cent to 50 per cent," they said.