Resident doctors from various associations have alleged that the bill has provisions that are "anti-poor, anti-student and undemocratic". 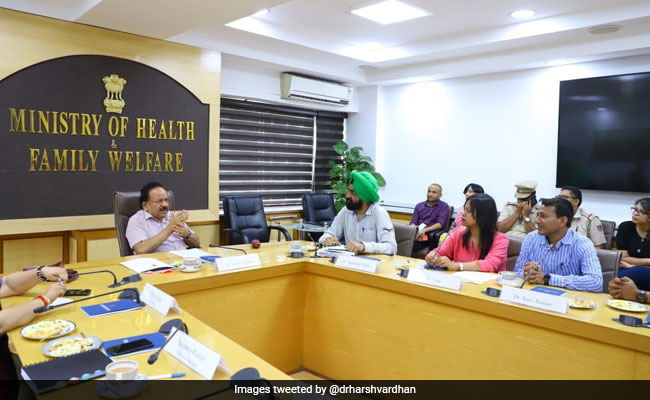 Union Health Minister Harsh Vardhan on Friday met doctors protesting against the National Medical Commission Bill and urged them to resume work, saying the legislation is in the interest of doctors, patients, medical students and the society.

His appeal came as resident doctors at several government hospitals continued their strike for the second day against the legislation that seeks to regulate the medical education sector. The doctors say the bill promotes quackery and is "anti-poor, anti-student and undemocratic".

The government has described the bill, which will replace the corruption-plagued Medical Council of India with a new body - the National Medical Commission, as one of the biggest reforms in medical education.

The legislation was passed by Rajya Sabha Thursday night but it will go back to Lok Sabha as two amendments need to be approved by it.

On Friday, as the doctors continued their strike and threatened to prolong it indefinitely, Mr Vardhan met their representatives, who included people from AIIMS and RML hospitals in Delhi and Federation of Resident Doctors Association.

He said he tried to clear their doubts about some provisions in the bill.

"They had queries about AIIMS being included for the NEET. They wanted clarity on the NEXT, how one can get admission to PG through this exam and also on the definition of community health providers," Mr Vardhan said.

The bill proposes a common final-year MBBS examination - the National Exit Test (NEXT) - for admission to post-graduate courses and to obtain licence to practice medicine.

"I addressed their queries and told them how NMC will work and also explained them the role of Community Health Providers (CHP). It should be noted that the concept of mid-level practitioners is recognised worldwide and this concept has also been highlighted by the WHO and the Lancet Journal," the minister added.

Mr Vardhan also cited examples of developed and developing countries like the US, the UK, Australia, China and Africa to support his argument that they too follow a similar arrangement.

He said the National Medical Commission will decide who all need to be trained and how they can be included in primary healthcare system.

"A majority of members in NMC are highly qualified doctors and well wishers and protectors of the integrity of the medical profession and the medical fraternity.

"More so, the NMC will put their course of planning or decisions in the public domain and decisions will be finalised through consultative process," Mr Vardhan said.

Saying the bill is "historic" and in the interest of doctors, patients, medical students and the nation, he also tweeted his appeal in Hindi to doctors to end their strike.

"Doctors should not defy their duties towards patients. The NMC Bill is a visionary revolution to reform the medical education sector. It is a blessing for aspiring doctors. Those who are not able to understand it (now) will realise its benefits in the coming years," the Union minister said.

Despite the meeting between the minister and the doctors on strike, healthcare services at many government hospitals remained affected as the strike continued.

The resident doctors have withdrawn all services, including emergency services, in protest against the bill since Thursday morning.

The medical fraternity wants some provisions of the bill amended.

The fraternity is opposing section 32(1), (2) and (3), saying they encourage quackery by providing licence to practice modern medicine as community health providers for persons other than those possessing MBBS degrees.

They expressed uncertainty over the introduction of NEXT and scrapping the NEET-PG. They are also opposing decreasing the percentage of seats under controlled fees structure in private medical colleges and deemed universities from 85 to 50 per cent, reducing the representation of elected members from 75 per cent in MCI to 20 per cent in NMC and autonomous boards constituted there under.

They also object to Section 45, which, they claim, empowers the Union government to override any suggestion of NMC.