The rally covering a total distance of 2,700 km from Gogra (Ladakh) will reach Kevadia (Gujarat) to participate in the National Unity Day Parade on October 31. 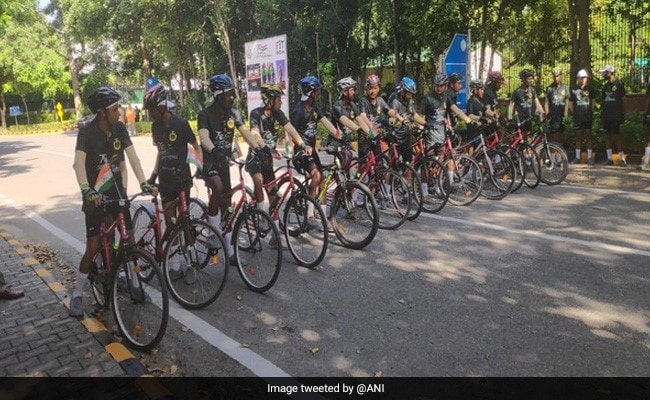 Director General Indo-Tibetan Border Police (ITBP) on Monday flagged off the fourth phase of the longest cycle rally of the force from the National Police Memorial in the national capital.

This rally covering a total distance of 2,700 km from Gogra (Ladakh) will reach Kevadia (Gujarat) to participate in the National Unity Day Parade on October 31.

The cycle rally started on August 27 from an altitude of 4,500 metres in Ladakh and crossed harsh climatic and terrain conditions, before reaching Manali via Atal Tunnel.

The 45-member ITBP cycle rally team will complete the journey of 1,100 kilometres to the Statue of Unity passing through Delhi, Haryana, Rajasthan and Gujarat in the next 25 days.

DG ITBP praised the cyclists for their dedication and devotion to the mission and said that the ITBP's role in the awareness campaigns and outreach programmes through the cycle rallies under the aegis of the Azadi Ka Amrit Mahotsav in the 75 week's campaign has been truly inspiring.

Arora said that the force will continue to serve the nation with the same spirit and enthusiasm and will do its best for the security and service of the country, true to its motto- 'Shaurya, Dridhata, Karmanishtha'.

Various patriotic theme-based programs under the aegis of Azadi Ka Amrit Mahotsav will be organized by the rally en-route. It will visit the historical places related to the freedom struggle and freedom fighters en-route.