"Our petroleum ministry is setting up five ethanol plants, where the fuel will be produced from paddy straw, wheat straw, sugarcane and municipal waste. (Consequently) Diesel will be available at Rs 50 per litre and petrol at Rs 55," he said. 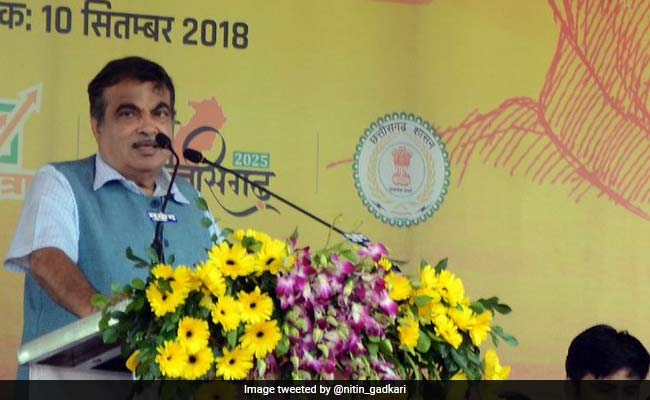 Use of alternative fuels will cut down our dependence on petrol and diesel, Nitin Gadkari said

Addressing a gathering at Charoda in Chhattisgarh's Durg district of the state, he said use of alternative fuels will cut down our dependence on petrol and diesel.

Mr Gadkari laid the foundation stones of or dedicated total of eight construction works worth Rs 4,251 crore, including four fly-overs between Raipur to Durg yesterday.

"Growth rate of the agriculture sector in Chhattisgarh is very good. Production of rice, wheat, pulses and sugarcane is abundant here, but the state can also emerge as a bio-fuel (production) hub," he said.

Bio-fuel produced from Jatropha plant in Chhattisgarh was used in the first bio fuel-powered flight which took off from Dehradun and landed in Delhi recently, he said.

The state has immense potential for production of bio-fuel which will create job opportunities for farmers, tribals and forest-dwellers and empower them, he said.

A research institute on biotechnology should be set up in the state capital Raipur which can help the state lead in the production of alternative fuels in the country, he said.

Switching to ethanol, methanol, bio-fuel and CNG will cut down dependence on petroleum and reduce the prices of petrol and diesel, he said.

"We are importing petrol and diesel worth Rs 8 lakh crore and prices are increasing. Rupees is falling against dollar. I have been saying for last 15 years that farmers, adivasis (tribals) and forest-dwellers of the country can produce ethanol, methanol, bio-fuel and can (become rich enough to) fly planes..." the union minister said.

"We have decided to exempt vehicles including auto-rickshaws, buses, taxis run on alternative fuels like ethanol, biodiesel, CNG, methanol and bio-fuel from permit requirements," he said.

"Our petroleum ministry is setting up five ethanol plants, where the fuel will be produced from paddy straw, wheat straw, sugarcane and municipal waste. (Consequently) Diesel will be available at Rs 50 per litre and petrol at Rs 55," he said.

Saying that he has approved the projects demanded by the Chhattisgarh government, he said, "I am the only minister who has no dearth of money (for his department). I have so far inaugurated works worth Rs 40 lakh crore."

"I have no dearth of money but I ensure that the work is done in a good way. After getting works worth Rs 40 lakh crore executed, I can confidently say that no contractor had to come to the office with bills (to get them passed). All the works which were done were corruption-free and done in a transparent manner," Mr Gadkari said.