People here are very excited about the bridge, but the livelihood of about 5,000 people will be gone since the boat ghat will become defunct. 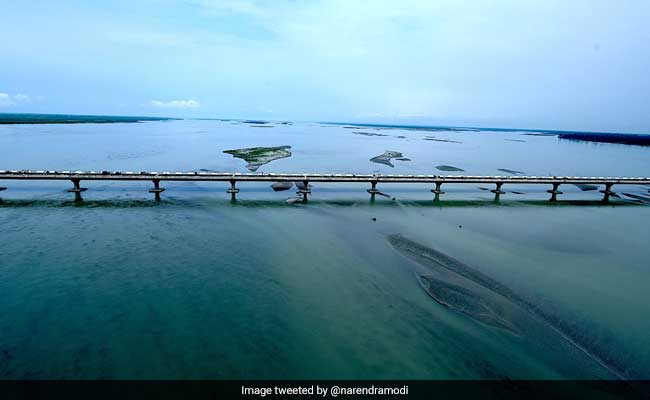 Dhola, Assam: At the boat ghat, as Bhakta Gurung settled in a seat in the last boat of the day from Dhola, a small town in Assam's Tinsukia district, 570 km from Guwahati, to Sadiya, he told NDTV that boats are the only way to cross the turbulent Lohit River, a tributary of the Brahmaputra.

Every year, the river swells following heavy rainfall and the boats stop plying leaving Assam's Sadiya and Eastern Arunachal Pradesh cut off from the rest of the country.

"We have been using this river link for ages and it was a dream to have a bridge. But now it is a reality and we are so excited. We sometime don't get the boat in time, at times boats don't ply and in case of emergencies we feel helpless as boats aren't available at night. Now we are tension-free as we can travel at our will," said 29-year-old Gurung.

Today, Mr Gurung's felt proud and relieved when Prime Minister Narendra Modi inaugurated and dedicated to the nation the Dhola-Sadiya bridge, the longest bridge in the country.

The 9.15 km bridge is longer than the 5.6-km-long Bandra-Worli Sea Link. It will connect and bring closer the people of Assam and Arunachal Pradesh.

PM Modi took a drive and asked his convoy to stop almost half way on the bridge. He got down to perhaps enjoy the historic moment as well as the breeze.

The bridge is an engineering marvel. It will provide an easy access to Indian armed forces to some of the most remote areas on the India-China border, a region full of rough terrains.

"When the bridge was under construction, inclement weather and floods were key challenges besides other local issues. The weather is unpredictable here, it can change any moment," said MNVS Satya Pathi Raju, HR Manager of Navayuga Engineering that constructed the bridge.

But the boatmen are a little worried. They urge the government to develop this area as a tourism circuit.

Promoted
Listen to the latest songs, only on JioSaavn.com
"People here are very excited about the bridge, but the livelihood of about 5,000 people will be gone since the boat ghat will become defunct. We request the government to look into this and may be a new plan can be worked out for alternative livelihood around the bridge," said Biswajit Roy, manager of Dhola boat ghat.

This bridge will become the lifeline for thousands of people living in remote areas and would be India's first statement towards building robust infrastructure in the eastern periphery.