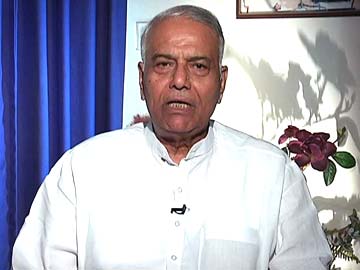 New Delhi: Senior BJP leader Yashwant Sinha raised eyebrows on Tuesday with a comment that after the arrest and alleged mistreatment of diplomat Devyani Khobragade in the US, India should reciprocate by arresting the same sex companions of American diplomats using a Supreme Court verdict that restored a ban on gay sex last week.

"My suggestion to the Government of India is, the media has reported that we have issued visas to a number of US diplomats' companions. 'Companions' means that they are of the same sex. Now, after the Supreme Court ruling, it is completely illegal in our country. Just as paying less wages was illegal in the US. So, why doesn't the government of India go ahead and arrest all of them? Put them behind bars, prosecute them in this country and punish them," Mr Sinha said.

Sources in the BJP say Mr Sinha may have been referring to an American diplomat and his partner, who faced visa difficulties last month.

Ms Khobragade, 39, was arrested for alleged visa fraud in New York last week and reportedly subjected to a humiliating strip search before being kept in a cell with drug addicts. She has refused to comment on this.

Promoted
Listen to the latest songs, only on JioSaavn.com
An angry India has asked US diplomats in consulates all over the country to surrender their identity cards and senior leaders like Rahul Gandhi and Narendra Modi have refused to meet a US Congress delegation.

The treatment of Ms Khobragade was described as "despicable and barbaric" by National Security Adviser Shiv Shankar Menon.